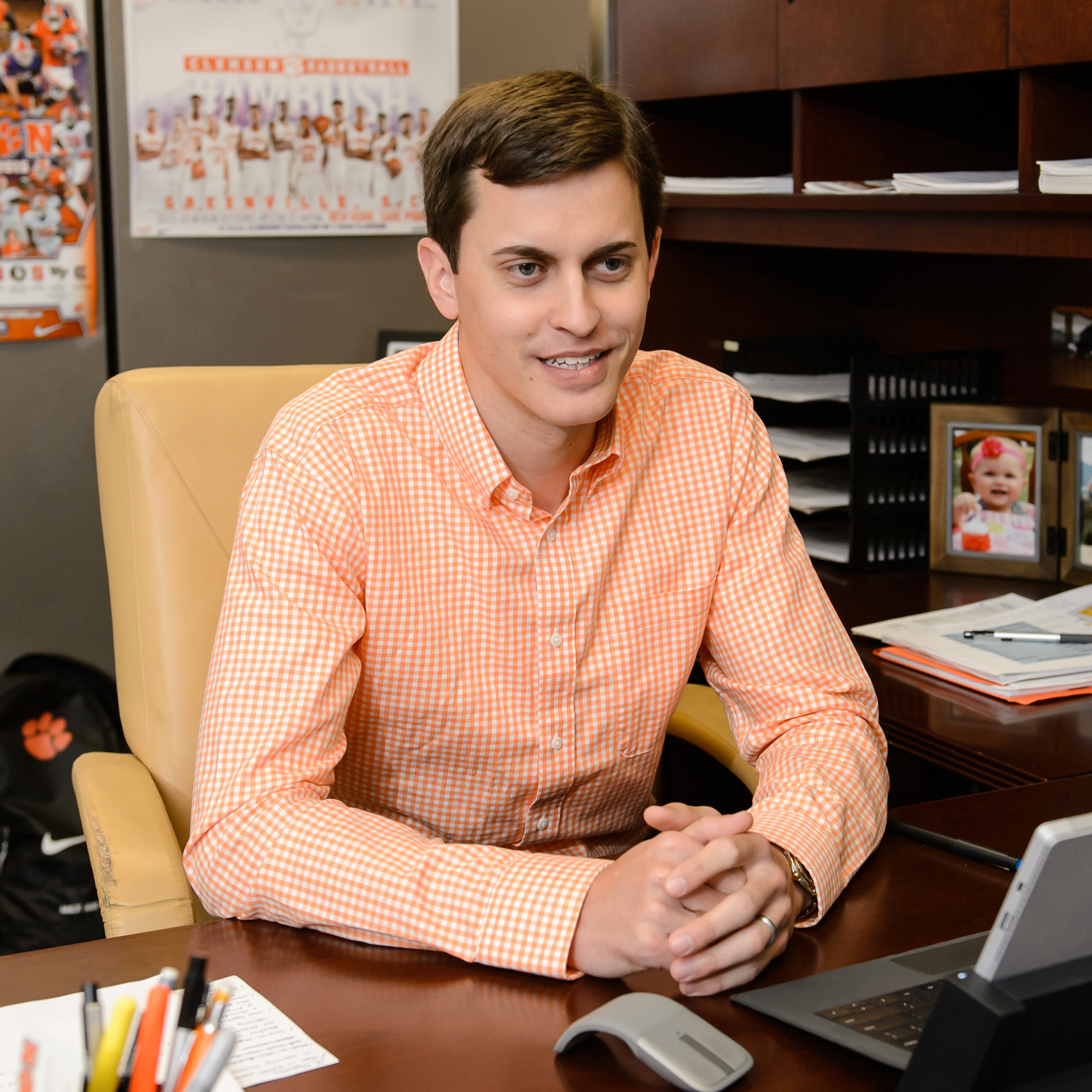 Eric George joined Clemson athletics in October 2015 as assistant athletic director for business operations. He came to Tigertown after spending two and a half years in a similar role at Texas.

We recently caught up with the native Texan to discuss his role in the department, his background as a football player and his first year involved in Clemson athletics.

Q) Take readers through your background.A) I grew up in College Station, Texas and was a lifelong (Texas A&M) Aggie fan. I had a chance to play football there for about a year and a half. Jaw surgery ended my career prematurely. Once that ended, it was time to focus on school and figure out what I wanted to do. Texas A&M offered a five-year program that allowed me to earn my master’s degree as well. I earned a bachelor’s degree in business administration and master’s in accounting. I went on to Deloitte for about two years, doing international tax work in Dallas. It got to the point that I wanted to evaluate whether or not to do it long term or make a change. So I decided to work in athletics, something I really enjoyed. I left Deloitte and went to Florida State to work toward a PhD in sport management. I went through that program, and around Thanksgiving in 2012, a job opened up in the athletic business office at Texas. Working with the largest budget in the country was an opportunity that was too good to pass up. It was the arch-rival of Texas A&M, so it took me some time to get used to burnt orange. I began working in Austin in January 2013. I worked for some great people for about two and a half years. I became connected to CABMA (College Athletic Business Management Association) and met Graham Neff, an athletic director at Clemson. The plan was to be there a few years, learn as much as I could and move on. My wife and I had a detailed plan of where we wanted to be.

Q) Did your playing career lead to the interest in athletics?A) It did. I wanted to take the business knowledge I learned from school and apply it in a sports setting. That’s my life. I wish I had more interaction with the student-athletes directly…that’s the one drawback to being in the business side of things. But we still try and do as much as we can to benefit the student-athletes, to make their experiences as good as mine was.

Q) Tell us more about your football background.A) I was recruited as a wide receiver and punter, but I had an academic scholarship. I was a preferred walk-on for the Aggies.

Q) What are some of your favorite stories of College Station?A) My freshman year (2005), we actually played in Clemson. I redshirted, so I didn’t make the trip, but I remember Jad Dean making the late field goal to win the game. Initially, I didn’t like Clemson too much (laughs). But everyone had great things to say about the school. One of my childhood friends was born here, but grew up in College Station. He ended up coming back to school at Clemson. He had nothing but great things to say. The schools are similar. They’re both small college towns. On Saturdays, everything shuts down for the football games. The military history is very similar. My father went to Texas A&M and we had season tickets. I actually played at Kyle Field twice in high school, against our cross-town rivals. There was something unique about running out onto that field. It’s different here, but you see a lot of those same qualities in Clemson.

Q) Why did Clemson athletics draw your interest?A) There were a lot of things. We wanted to be in the South with a better climate. I can’t handle the cold (laughs). I wanted to be at a “football school.” Growing up in Texas, football is everything. I wanted to work with a pretty substantial budget. I wanted to be in a place where I wasn’t in a position having to tell everyone “No” all the time. We wanted to be in a family-friendly spot. We have a young daughter with another one on the way. We wanted them involved in a good community. I learned a lot at Texas, but some folks ahead of me weren’t going anywhere. I wanted more responsibility, so I moved on. Luckily, the Clemson opportunity came along pretty quickly.

Q) What are your primary job responsibilities?A) I oversee the business office and our operations. I’m not in the weeds paying invoices and those sorts of things. But I manage the day-to-day needs of the office. I oversee the budget by making sure we’re good, not only on our current fiscal year, but also with our five-year projections. I look at how things impact us in the long term, especially with facilities and financing. I work with our aviation department and with other projects as they come up.

Q) How big has Graham Neff been as a resource for you?A) It’s been huge. I can’t even describe it. He’s a sharp guy. He’s personable and I see how he interacts with everyone. It’s nice to know that I can go to him with questions. He’s been here since they decided on so many of these budget items. Having access to that knowledge is great. He’s flown up the ranks, and to have him as a mentor has been huge.

Q) How exciting is it to be in Clemson during such a great time in athletics?A) It’s unbelievable. My first week was the week we played Notre Dame in football. That was an incredible experience, to see the packed house and all the fans staying through the rain. Growing up in Texas, everyone played soccer, but the colleges didn’t. To be here with men’s soccer as they advanced to the national championship game a couple of months after I got here was cool. And then football followed a month later. You hope it continues, but you don’t want to take it for granted. You want to sit back and enjoy the time you have. To see the business side of the national championship experience with football was great, from booking charter flights to hotels. It was a great learning experience, but as a college football fan, it was a bucket list item. The facilities initiative here is unbelievable. We’re doing it seemingly across the board. If you’re someone who is being recruited by Clemson, I don’t know why you wouldn’t want to come here. It’s got everything.