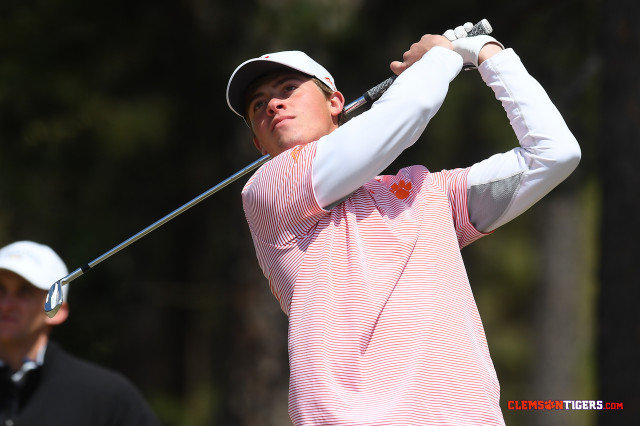 Clemson, S.C.—The Clemson men’s golf program will play host to its third annual Clemson Invitational this weekend at the Cliffs at Keowee Falls Golf Course in Salem, S.C. The field will include 12 teams from around the country, including ACC members Clemson, Boston College and Notre Dame. Teams from the state of South Carolina include Furman, Winthrop and Wofford.

Competition will begin Friday, April 13 and conclude Sunday April 15. Tee times will begin each day at 8:50 a.m. from holes one and 10 at the par 72 course. Live results will be available at golfstat.com.

Clemson has won the tournament each of the first two years and with a No. 14 ranking by Golfweek and No.15 ranking by Golfstat, is the favorite once again. Larry Penley’s Tigers are coming off victories in two of their last three tournaments. The Tigers won the Puerto Rico Classic on Feb. 20, finished second at the Bandon Dunes Championship in Oregon March 13, then won the Irish Creek Collegiate in Kannapolis, NC last week. Clemson is 40-1 against the field over its last three tournaments.

Turk Pettit enters this event with a 70.14 stroke average, on pace to be the top average in Clemson history. The freshman who played high school golf in Auburn, Ala. has four top 10 finishes, all of whom are in the top three. The second highest ranked freshman in the ACC won his first college tournament last week by three shots at the Irish Creek Collegiate with a four-under par score. He has 14 under-par rounds, including eighth in the 60s so far this year.

Bryson Nimmer is close behind Pettit in terms of stroke average at 70.57 for his 21 rounds and seven tournaments. The two-time All-ACC golfer has 11 under-par rounds and four top 10 finishes this year, including a second-place at the Carpet Classic to open the season.

William Nottingham, holder of the Clemson single round record with a 62 recorded last year, has a 73.67 stroke average so far this year.

Also participating as individuals in the tournament are Coleman Self and Peter Mathison. Sophomore All-American Doc Redman will not play as he competes in the PGA Tour’s Heritage Classic this weekend on Hilton Head Island. Redman will return next week for the ACC Tournament.

History: 3rd annual event, Clemson has been champion each of first two years.

Clemson Rankings: No. 14 by Golfweek and No. 15 by Golfstat