MINNEAPOLIS – Despite holding No. 7 Minnesota to its second-lowest single-match hitting percentage (.195) of the season, the Clemson Volleyball team came up short Thursday night. The Gophers improved to 5-2 on the season, defeating Clemson, 25-22, 25-22, 26-24, in front of a jam-packed Maturi Pavilion. Clemson’s Kaylin Korte (15 kills and 13 digs) recorded her ninth career double-double, while libero Emily Curtis tallied 25 digs, the most by a Tiger this season.

Korte was all over the floor in the first as she posted seven of her match-high 15 kills along with eight digs in the first frame, while hitting .389. Minnesota captured momentum early, jumping out to a 7-2 lead early in the first, which prompted an early Clemson timeout. The Tigers scored off a long rally in the middle of the set to shift momentum in Clemson’s favor and cut the its deficit to 19-15. Two plays later, Clemson ignited a 5-0 run, which cut the Gopher lead to one (21-20). Minnesota then took four of the final six points of the set to win game No. 1, 25-22.

Clemson carried its synergy into the second and found itself leading 17-16 midway through the set, but four attack errors and two service errors spoiled the Tigers’ effort. Minnesota, once again, took the set, 25-22, and a 2-0 lead heading into the break. Korte reached her fifth double-double of the season in the second after finishing the set with 11 kills and 11 digs. Curtis had notched 20 digs heading into the break.

Two sets in against #7 Minnesota and libero Emily Curtis already has 20 digs under her belt!

Up next, Clemson (5-5, 0-0 ACC) returns to Maturi Pavilion tomorrow, Sept. 20, to take on Oral Roberts (4-8, 0-0 Summit) in the Tigers’ final non-conference matchup of the regular season. Clemson and the Golden Eagles are set to square off at 6 p.m. (ET). Live stats for Friday’s match can be accessed on ClemsonTigers.com. 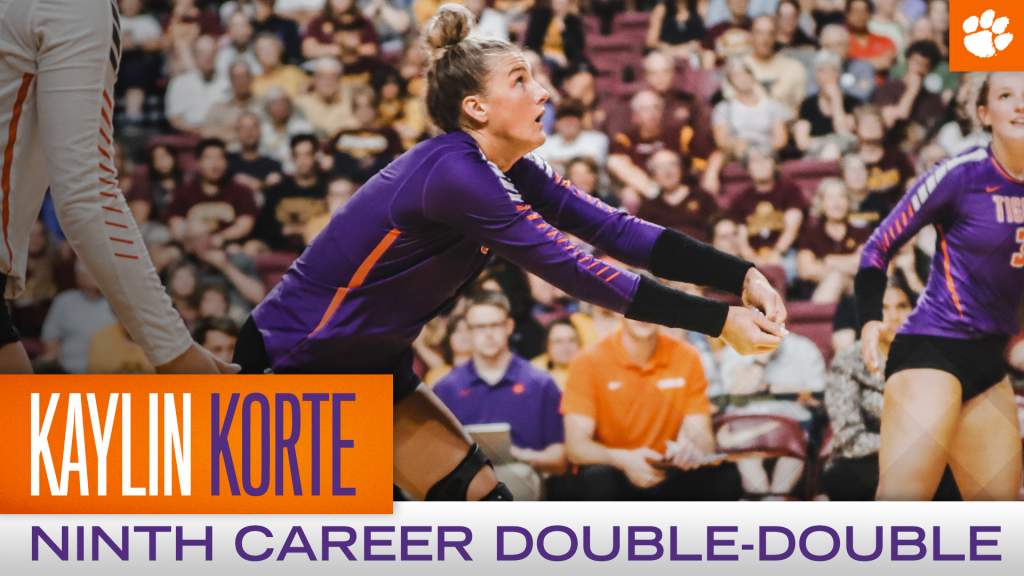