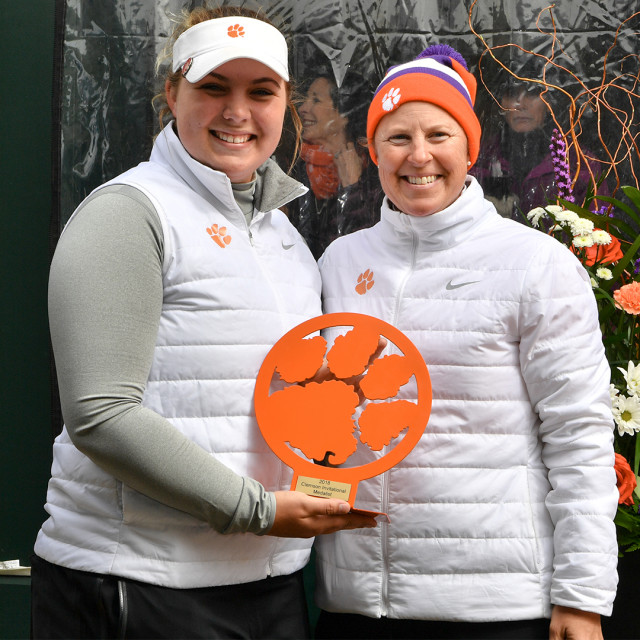 Clemson, S.C.—Clemson’s women’s golf team, elevated to the top 25 in the nation in the latest Golfweek/Sagarin poll released this week, returns to the course Friday at the Bryan National Collegiate near Greensboro, N.C. The 18 teams will play 36 holes on Friday and 18 Saturday.

Kelley Hester’s Tigers will be one of six top 25 teams, and 11 top 50 teams from around the nation. The field includes ACC teams Clemson, North Carolina, NC State, Miami (FL), Notre Dame, Virginia and Wake Forest and will serve as a preview of the ACC Tournament in three weeks. The field also includes Auburn, Kentucky, South Carolina and Tennessee from the SEC.

Clemson moved to No. 23 in the nation according to the Golfweek/Sagarin poll released on Tuesday of this week, the highest ranking for the Clemson women this year. Clemson has been on a strong run the last three tournaments. Clemson won the 16-team the Houston-Dickson on Feb. 27, finished sixth out of 13 at the Sun Trust Gator, then finished third out of 15 at the Clemson Invitational March 23-25.   Clemson is 35-7 against the field over its last three tournaments.

The Bryan National Collegiate is played at Bryan Park Champions Country Club in Browns Summit, N.C. The par 72 course is 6,386 yards, the third longest course Clemson has played this year.

Clemson will be led by No. 1 player Alice Hewson, the ACC Player of the Month for March after she won the Clemson Invitational with a 10-under par score of 206. Hewson has a 71.48 stroke average so far this year with 10 under-par rounds and six top 15 finishes.

Ana Paula Valdes is second on the Clemson team in stroke average at 72.90, but senior Sydney Legacy is close behind at 72.92. Legacy is coming off her career best performance as she shot a seven-under pa 209 to finish fourth at the Clemson Invitational.

Kennedy Swann, a sophomore from Austin, Texas, also will be in the Clemson lineup. She has a 74.59 stroke average for the yea, but is second on the team in rounds in the 60s with five so far this year.

Marisa Messana will be in the Clemson lineup as well. The Academic All-American has a 76.45 stroke average this year. Her second round 71 helped Clemson to a third-place finish at the Clemson Invitational. Calista Rice also will see action as an individual.