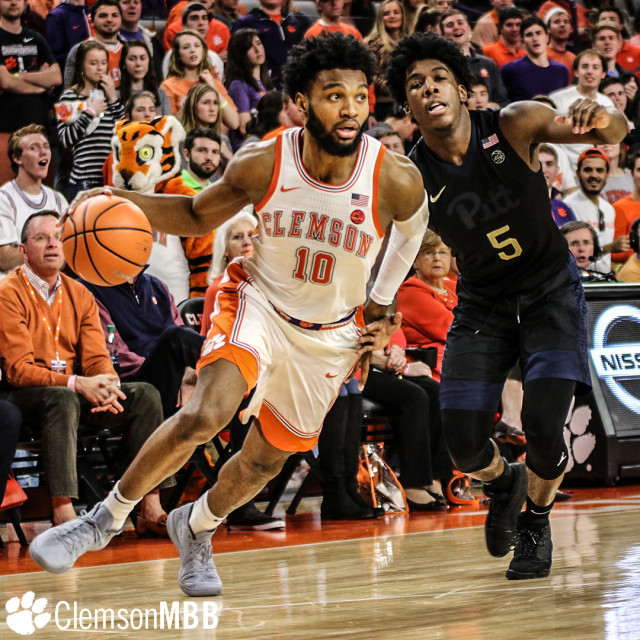 CLEMSON, S.C. — Behind a career-high-tying 25 points from senior guard Gabe DeVoe and a defensive effort that held Pittsburgh to just 48 points, Clemson University men’s basketball ran away with a 72-48 victory on Thursday night in Littlejohn Coliseum.

DeVoe, already tying his career-high in points, made a career-best seven triples, nine total baskets and grabbed six rebounds in the winning effort.

The Tigers (20-4, 9-3 ACC) earned its 20th win of the season, clinching the program’s 14th 20-win campaign in its history. Three of those seasons have now come under the direction of head coach Brad Brownell. The win marked the third fewest games needed to get to 20 wins in Clemson history.

The Tigers would cruise the rest of the way for the convincing 24-point victory.

Clemson will have five days in between games before traveling to Tallahassee to take on Florida State on Valentine’s Day (Wed., Feb. 14) at 7 p.m.

Notes: The win improves Clemson to 9-3 in the ACC, 4-3 all-time against Pittsburgh and clinches the program’s 14th 20-win season in its history … of those 14 seasons, three haven now come under the direction of head coach Brad Brownell (2010-11; 2013-14) … the win also marked the third fewest games needed to get to 20 wins in Clemson history (22 games in 1986-87; 23 games in 2008-09) … Gabe DeVoe became just the second player in Clemson history to make at least five 3-pointers in four consecutive contests (tying Michael Tait – 1986-87) … DeVoe is shooting 22-for-34 (64.7 percent) from distance in his last four games … DeVoe also tied his career-high in points (25) … topped his career-best in made threes (7) … Shelton Mitchell collected his 300th career assist … Elijah Thomasnotched his sixth double-double of the season and eighth of his career … Thomas also surpassed 300 career rebounds … fourth-straight game with 10+ made 3-pointers – most since 1983 … the 48 points allowed was tied for the fewest allowed by Clemson all season (South Carolina on Dec.19).