Clemson, SC—Clemson senior Bryson Nimmer is one of 28 college golfers from around the nation in all divisions named to the 2019 Ben Hogan Award watch list, according to a joint announcement made Wednesday by the Hogan Trophy Award Foundation, the Friends of Golf (FOG) and the Golf Coaches Association of America (GCAA).

The Ben Hogan Award presented by Konica Minolta Business Solutions U.S.A., Inc. (Konica Minolta) is given annually to the top men’s NCAA Division I, II or III, NAIA or NJCAA college golfer taking into account all collegiate and amateur competitions during a 12-month period from June to May.

So far this year, Nimmer has nine rounds in the 60s and 10 rounds under par.    He had 72 birdies in the fall, third in the nation.   The native of Bluffton, S.C. began the year by winning the Carpet Classic and the Maui Jim Invitational.  He is the first Clemson golfer to win two fall events. He shot 10-under-par at the Carpet Classic, then shot 15-under-par in scoring a school record 195, in winning the Maui Jim Invitational with rounds of 67-63-65.  That 63 tied for the second best round in Clemson history.

This year’s list of 10 semifinalists, which could include individuals not on the watch list, will be unveiled on Wednesday, April 17. On Thursday, May 2, that group will be pared down to three finalists. The finalists will attend a black-tie dinner at Colonial Country Club in Fort Worth, Texas, on Monday, May 20, prior to the start of the PGA TOUR’s Charles Schwab Challenge, where the winner will be crowned. 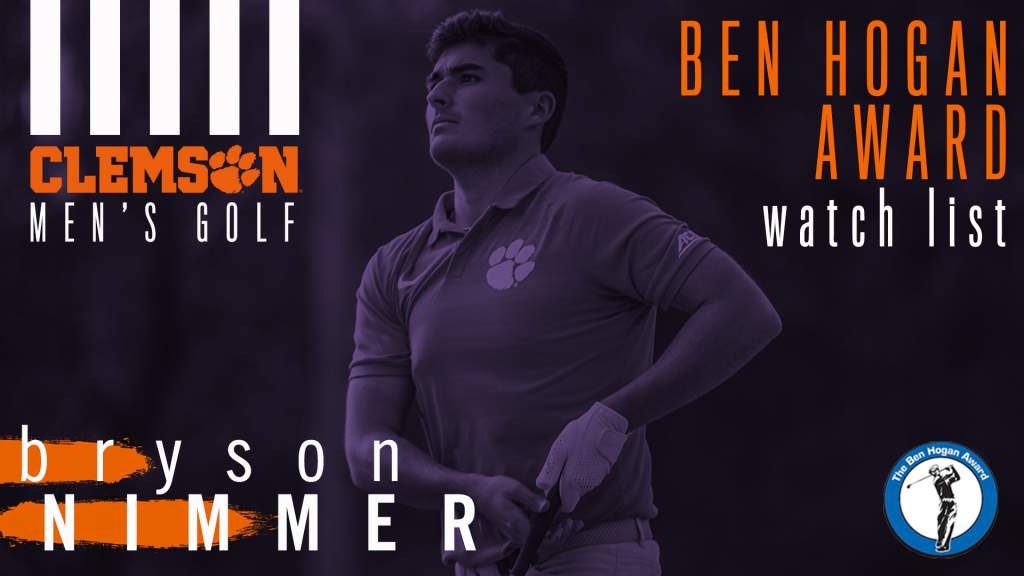