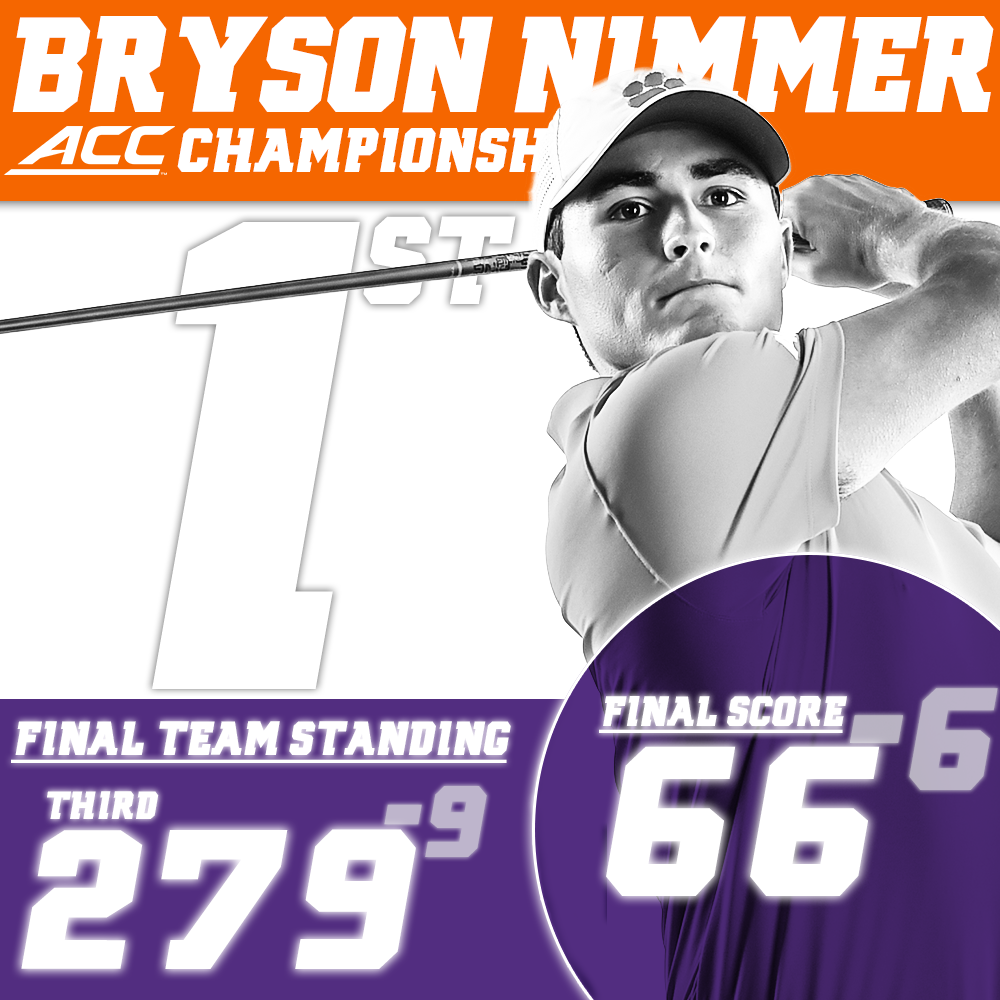 Clemson, S.C.—Bryson Nimmer shot a six-under par  score of 67 to lead Clemson to a nine-under par team score of 279 and a third place standing after the first round of the ACC   Men’s Golf Tournament at Musgrove Mill Golf Club in Clinton, S.C.   Clemson is just two shots off the lead score of 277 by Duke after 18 holes.

With poor weather predicted for Sunday, the 12 teams in the field will play 36 holes and conclude the tournament on Saturday.  Clemson is the defending champion and has won a school record tying six tournaments this year.

Duke’s score of 11 under par 277 leads the way, one shot ahead of Florida State and two ahead of Clemson.  Georgia Tech is fourth with a 288 score, nine shots in back of the Tigers.  NC State, the only team to beat Clemson this spring, is fourth at 291, while ninth ranked Wake Forest, the highest ranked team in the tournament, is sixth at 292.

Nimmer had seven birdies and just one bogey in shooting a score that was just one off his career best.   His opening 66 tied the Clemson record for the best opening score in the first round of the ACC Tournament.  John Engler also had a 6under par 66 at the 2001 ACC Tournament in Orlando, Fla.  Engler went on to win that tournament.

Nimmer has a one shot lead over Cristobal Del Solar of Florida State and Ben Griffin of North Carolina, who both had scores of 67. Nimmer’s seven birdies tied for the most in the field of 60 golfers.

Carson Young gave Nimmer great support with a three under par 69.  The senior from Pendleton has been Clemson’s best player of late with three top three finishes in his last three events.  It was his eighth round in the 60s in his last 13 rounds and he is now 24 under par for his last 10 rounds.

Freshman Doc Redman, Clemson’s leader in stroke average so far this season, had a one-under par 71,  his 21st under par round of the year.  He is now 40 under par for his 31 rounds this season.   He had just two birdies and a bogey, but finished with 15 pars, second most in the field.

Freshman William Nottingham had a one over par 73 and was Clemson’s fourth counting score.  He had two birdies and three bogeys on the day.  Josh Fickes was Clemson’s none counter with an 82.  He was nine over par for his first 10 holes, but settled down to play the last eight holes in one over.