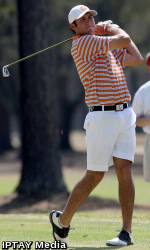 CLEMSON, SC – Clemson junior golfer Corbin Mills has announced that he will turn professional this summer and forego his senior year of eligibility. Mills was a first-team All-ACC performer in 2011-12 who played in the Masters this past April after winning the US Public Links Championship last summer.

“I want to thank Coach (Larry) Penley, Coach (Jordan) Byrd, and everyone associated with the Clemson golf program,” said Mills. “I never dreamed when I entered Clemson that I would have this opportunity. Playing at Clemson has allowed me to improve my game against the nation’s top competition. That has been a big factor, playing against the best college teams and players in the nation. The facilities are also second to none and have allowed me to play my best.”

Mills won the US Public Links last summer at Bardon Dunes Golf Resort in Oregon, his first tournament on a links style course. He then won the Players Amateur the following week, a victory that got him an invitation to the Heritage on the PGA Tour. He missed the cut at the Heritage by one shot this year.

Mills also won the Jerry Pate Invitational last October when he shot a 201 score, tied for the low gross score in Clemson history for a 54-hole event. Among the players he defeated on the last day was number-one ranked Jordan Speith of Texas.

Mills will play two more amateur events this summer, the British Amateur at Royal Troon in Scotland from June 18-23, and the Palmer Cup, for the United States team at Royal County Down in Northern Ireland, June 28-30. He enters those events ranked sixth in the World among amateurs by the R&A and eighth in he world by Golfweek.