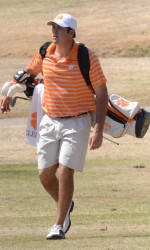 Clemson, SC – Corbin Mills continued his strong play on Friday with a three-under par 69 in the second round of the Players Amateur at Bluffton, SC. Mills has a 136 total after two rounds (67-69) and has a one shot lead entering Saturday’s third round of the four-round event at Belfair Golf Club.

Mills has a one-shot lead over Kalem Richardson of Australia, who is at five under par 137. Kramar Kickok of Plano, TX and Eric Chun of Evanston, IL are tied for third at 138.

Mills had eight birdies and five bogeys in recording his 69 on Friday and now has 15 birdies through 36 holes. He birdied all four par-five holes and is now eight-under-par on the par five holes through two rounds. He had four straight birdies on holes 10-13, but did bogey the last two holes.

Clemson rising junior Crawford Reeves had a solid day with a 70. His 143 score stands in a tie for 13th. His day included an eagle three on the par five seventh hole. He also birdied the difficult 18th hole.