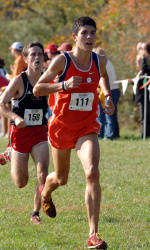 Alex Padgett started off the day for the Tigers, placing 8th in the discus, putting in a throw of 155’1″.

In one of the most heated races of the afternoon, the 4X100 meter relay, the Tigers group of Trenton Guy, Corey Brown, Cowin Mills, and Travis Padgett edged Florida State down the stretch to win the ACC Championship by 0.06 seconds. The Tigers clocked in a 39.40. Padgett and FSU’s Charles Clark were neck-and-neck coming into the final leg, with Padgett pulling away in the last 25 meters. This was the first 4X100 relay ACC Championship for Clemson since 2004, when the winning group posted a time of Griffin, Hill, Richards and Currie finished in 39.75. The ACC record was a 38.78 set last season by FSU.

The Tigers made a huge jump during the 100 meter dash. Coming into the event, the Tigers sat tied for 4th with 76 points. When they were done, they had grabbed first by 21 points with 100 overall. Travis Padgett became the first man in the history of the ACC to win the event three times and did so in 10.17 seconds, an ACC meet record, with a 1.8 headwind. Sophomore wideout Jacoby Ford took second in only his second race back from injury in 10.43 seconds, an NCAA regional qualifying mark. It marks his first All-ACC performance in outdoor track and field.

Another two-sport star, C.J. Spiller, took fourth in the event, clocking in at 10.60, 0.01 seconds behind the third-place finisher. Freshman Trenton Guy placed eighth after pulling up at the end of the race. Guy received medical treatment on his hamstring immediately following the race, and it is not believed to be a serious injury.

Florida State answered back to take the lead in the 200 meter dash, taking first, third, and fourth. Tiger Travis Padgett was able to break up the Seminole trio, finishing second in 20.83. Corey Brown and Cowin Mills also picked up points for the Tigers, placing sixth and seventh, respectively.

In the Pole Vault, Mitch Greeley continued his hold on the event, taking the individual title clearing 17′ ¾” for the title. The Championships is Greeley’s second in outdoor competition, after he won in the 2006 Championships. Chris Spear took fourth for Clemson, clearing 16′ 6 ¾”, an NCAA regional qualifying time.

In the triple jump, redshirt-freshman Josh Fowler put up valuable points for the Tigers, placing fifth. He put in an NCAA regional qualifying mark of 49′ 7 ¼”feet, a career-best by almost three feet.

In the final event of the afternoon, the 4X400 relay, the Tigers group of Cowin Mills, Miller Moss, Andrew Porter and Corey Brown placed fourth in 3:08.78. The time is an NCAA Regional Qualifying mark.

The Tigers will return to action on April 25 and 26 in Philadelphia, Pa. for the Penn Relays.