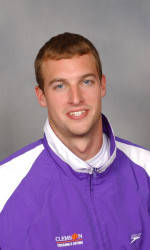 Chapel Hill, NC – On a fast second day of competition from Koury Natatorium at the ACC Championships, the Clemson Men’s Swimming and Diving team held their own as nine different Tigers earned second swims for tonight. Mark Vahle and Attila Ruszka each placed in the top eight for Clemson, and will have a chance at the title in their respective events.

Tonight’s finals session for the 500 freestyle, 200 IM, 50 freestyle, and 200 freestyle relay will start at 7 p.m. A live broadcast can be viewed at the ACC Select website.