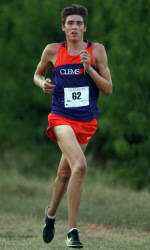 SPARTANBURG, SC – Led by sophomore Ty McCormack’s runner-up finish in the 8K, the Clemson men’s cross country team tied Davidson for first place at the season-opening Eye Opener hosted by USC Upstate. The Tiger women, racing without several of their best athletes, placed second in the team standings. In an unusual move, both teams ran together on the Milliken Center course after a weather delay pushed back the starting times.

McCormack ran with the pack for much of the race, but made a move toward the front with about a mile to go. He ended up with a time of 25:44 over the 8,000-meter course. The next finisher for the Tigers was red-shirt freshman Aaron Ramirez, who had a time of 26:03 and was sixth place. Freshman Scott Stanley of Indianapolis, IN came across the line in eighth, after a time of 26:11. The final two scorers on the night were Nathan Hendershot, who was 13th with a time of 26:39, and Tim Tyler, who was 18th at 26:48.

The women took a young group that did not include senior leaders and returning all-region runners Alyssa Kulik and Kim Ruck. The No. 1 performer Friday was sophomore Natalie Anthony, who had a time of 18:10 across a 5,000-meter distance. Elyse Borisko led a group of four consecutive finishers from 11th to 14th place, as the red-shirt sophomore posted a time of 18:29. Cara Talty, a transfer from Seattle, was 12th at 18:36. She was followed immediately by Walker Marion at 18:37. Alyssa Henshaw came across the finish line 14th with a time of 18:52.

The Tigers return to action in two weeks for the Clemson Invitational, which is scheduled for Friday, Sept. 2 at the Musser Farms Fruit Research Center near campus.