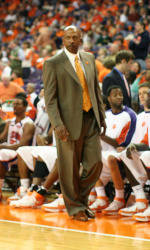 Clemson, SC – The men’s basketball program announced the signing of three prospects to national letters of intent on Wednesday, the first day of the early signing period. Clemson’s 2008-09 freshman class will include Andre Young, a 5-9 guard from Albany, GA, Tanner Smith, a 6-5 guard/forward from Norcross, GA, and Catalin Baciu (pronounced cuh-tuh-Leen BY-choo), a 7-1 forward/center from Cluj-Napoca, Romania.

Clemson’s recruiting class is listed #23 in the nation by Scout.com. It ranks among the highest in recent history for the men’s basketball program.

“We are really pleased with the addition of three outstanding prospects to our program,” said Oliver Purnell, Clemson’s fifth-year head coach.

Baciu, who goes by the nickname ‘Bobo’, is in his second year at Veritas Christian Academy in Fletcher, NC. He averaged 23 points, 13 rebounds, and four blocks per game last season while leading Veritas to a runner-up finish at the National Association of Christian Athletes championship. Included in his junior year accomplishments was a 25-point, 15-rebound performance versus the nation’s #1 ranked team, Oak Hill Academy. He chose Clemson over offers from Memphis, N.C. State, Virginia, Virginia Tech, and South Carolina.

“I believe Bobo will be one of the outstanding big men in college basketball before he’s done,” Purnell said. “His size, agility, and skill set all make him an outstanding prospect. We look forward to watching his continued development his senior year.”

Smith is a senior at the Wesleyan School in Norcross, GA. Last season, the 195-pound Smith averaged 25 points, eight rebounds, and four assists per game. He was an honorable mention All-State selection at the class AA level, and a standout for the Georgia Stars AAU team. His high school team enters the 2007-08 season as the favorite to win the AA state championship. He chose Clemson over offers from Oregon, Michigan, Vanderbilt, Georgia, Auburn, and Cincinnati.

“Tanner has shown a propensity for making the players around him better,” Purnell stated. “This, of course, is a rare commodity in a high school player. He also has shown the ability to score and play multiple positions. We believe he will be the ultimate glue guy.”

Young plays his high school basketball at the Deerfield-Windsor School. Rated as the top point guard in the state of Georgia, Young averaged 21.5 points and six assists per game as a junior in 2006-07. He stood out on the AAU circuit as a member of the Georgia Blazers. Young chose to sign with Clemson over offers from Florida State, Maryland, Purdue, Auburn, and Butler.

“Andre has great court presence,” Purnell said. “In his young career he has shown himself to be a tremendous leader. He, too, has the ability to score when necessary. His outstanding shooting ability should continue to upgrade our team offensively.”

Purnell is excited with the prospects signed and the overall direction of the men’s basketball program. “We think the makeup of this class will provide us not only help at the positions that we needed, but also with the overall character of our program.”