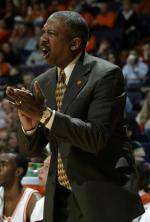 Clemson’s strength of schedule is ranked second in the nationby Sagarin and third by RPI. Clemson has three wins over teamscurrently in the top 25 of the RPI (North Carolina, NC State andBoston College). Clemson has more RPI top 25 wins than St.Joseph’s, Mississippi State, Stanford, Gonzaga, Kansas, Florida,Cincinnati, and Wisconsin and the same number as Syracuse, OklahomaState, and Texas. This will be Clemson’s third game againstVirginia this year. The Cavaliers have defeated Clemson twice by atotal of 14 points, including a 58-55 Cavalier victory the lasttime the two teams met. Olu Babalola was Clemson’s top playeragainst the Cavaliers in the two games this year as he led theTigers in scoring (26), rebounding (16) and assists (7). He made11-14 free throws. As a sophomore Babalola hit two free throws with5.7 seconds left to give Clemson a 78-77 victory over theCavaliers. This will be Oliver Purnell’s first head coachingappearance at the ACC Tournament. He has coached in threetournaments as an assistant at Maryland (1986-88) and the Terps hada 2-3 record. Purnell has a 16-13 record as a head coach inconference tournaments and has won a pair of tournamentchampionships. He won the Colonial Athletic Conference title at OldDominon in 1992 and the Atlantic 10 conference tournament titlelast year. While Clemson head coach Oliver Purnell’s has not beenthe head coach for a game in the ACC Tournament, assistant coachDr. Ron Bradley has. In the 1989 tournament, Maryland head coachBob Wade suffered a heart attack after coaching the Terps tovictory over NC State in the first round. Bradley led the Terps thesemifinal game vs. UNC. Chris Hobbs will be playing in his finalACC Tournament. While Hobbs has not had huge scoring games in theevent, he has made 7-9 field goals in the ACC Tournament over hiscareer. He has also played well against the Cavaliers, hitting27-51 shots from the field and averaging 10.3 points per game. Hiscareer high is 28 points, set against Virginia in the regularseason of 2001 and his only double figure scoring game this yearagainst an ACC teams was recorded at Virginia earlier this year.Sharrod Ford leads Clemson in scoring, rebounding and blocked shotsthis year. He is trying to become the first Clemson player to leadthe Tigers in all three categories in the same year since GregBuckner in 1994-95. Clemson has not played since a March 2 game atNorth Carolina. This is Clemson’s longest layoff entering the ACCtournament since 1971 when it also had a March 3-10 layoff prior tothe 1st round.

Clemson has a 13-50 record in the ACC Tournament with just oneappearance in the finals (1962) and no tournament championships.Clemson is the only original member of the ACC that has never wonthe ACC Tournament. This is tournament number 51. While Clemson hasstruggled in the ACC Tournament over the years, the Tigerswon fivegames in the 1990s. Clemson was 5- 10 in the 1990s, 1-10 in the1980s, 3-10 in the 1970s, 3-10 in the 1960s and 0-6 in the 1950s.Clemson is 1-4 in the 21st century. Clemson has won its openinground game of the tournament five of the last 11 years. Clemson wonthree years ago in the 8 vs. 9 game, 66-64 over Florida State inAtlanta. The Tigers last win in the quarterfinals in the ACCTournament took place in Greensboro in 1998, a 75-56 victory overWake Forest. Clemson trailed by eight at intermission in that game.This will be Clemson’s sixth appearance in the 8 vs. 9 game, afirst round game that has been in existence since 1991-92, thefirst year Florida State entered the league. The ACC had adifferent format three times since 1991-92 when the #1 seed faced#9 and #7 faced #8. Clemson is 2-3 in its previous five appearancesin the 8 vs. 9 game with the wins coming in 1994 and 2001.Clemson’s most exciting victory in the ACC Tournament in recentyears took place in the 1996 tournament when Clemson downed NorthCarolina, 75-73. It is Clemson’s only win over North Carolina inthe ACC Tournament and it was Clemson’s first win over the TarHeels in the state in 29 years. Greg Buckner’s dunk with 0.6seconds left won the game for Clemson. Clemson is 3-13 in Raleigh,3-11 in Charlotte, 5-19 in Greensboro, 1-4 in Atlanta and 1-3 inLandover, MD over the years in ACC Tournament play. Clemson has arecord of 2-5 in the first round (including a 2-3 record in the 8vs.9 game), 10-35 in the quarterfinals, 1-9 in the semifinals and0-1 in the finals for an overall 13- 50 record in ACC tournamentplay. Clemson lost its first eight ACC Tournament games between1954-61. Clemson’s first win the tournament was a 67-46 victory in1962. That 21-point victory is still the largest margin of victoryin Clemson history in an ACC Tournament game. Clemson has beenseeded in the top four of the ACC Tournament just 11 times in the51 tournaments. Clemson is 6-11 as a top four seed. The yearClemson reached the finals of the event (1962), Clemson was seededsixth. Clemson has been the number-one seed just once, 1990, theonly year Clemson has won the regular season of the ACC. Clemsonhas reached the tournament semifinals 10 times, including fourtimes in the 1990s (1990, 1993, 1996 and 1998). Clemson did notreach the semifinals any year between 1981-89. Clemson has been tothe ACC Tournament Championship game just once, in 1962. That year,Clemson was seeded sixth in the tournament in Raleigh and upset #3NC State and #2 Duke before losing to #1 seed Wake Forest, who wasled by point guard Billy Packer. Wake Forest went on to the FinalFour that year. Jim Brennan scored 34 points in Clemson’s semifinalvictory over Duke in 1962. Duke was ranked eighth in the nationoverall heading into that tournament and it is the highest rankedteam Clemson has beaten in the ACC Tournament. Clemson is 1-1 asthe number-one seed, 0-1 as #2, 3-4 as #3, 2-5 as #4, 1-4 as #5,3-8 as #6, 1-12 as #7, 1-11 as #8 and 1-4 as #9. Clemson is the #9seed this year. Clemson’s only win as the #9 seed took place in2001 when Clemson beat Florida State in Atlanta, 66-64. In ACCTournament play Clemson is 3-5 vs. Duke, 2-3 vs. Florida State, 0-2vs. Georgia Tech, 1-9 vs. Maryland, 1-12 vs. North Carolina, 2-5vs. NC State, 1-5 vs. Virginia, 3-7 vs. Wake Forest and 0-2 vs.South Carolina. Clemson’s only postseason tournament championshipin history took place in 1939 when the Tigers won four games infour days at the Southern Conference Tournament in Raleigh. TheTigers defeated North Carolina, Wake Forest, Davidson and Marylandto win the event. Clemson did not lead at the half in any of thosegames. Banks McFadden was the star of the Clemson team. Clemsoncame close to a championship under Larry Shyatt at the 1999 NITwhen the Tigers lost in the finals to California, 61-60.

Having a long layoff in between games has not been a bad thing for Clemson this year. Clemson opened the season with a 31-point victory over Gardner-Webb, scoring 86 points in the process. Clemson scored 53 points in the first half of that first game, Clemson’s highest scoring half of the season. The Tigers defeated Boston College 72-62 in one of its most impressive outings in the first game after Christmas. Clemson had seven days to prepare for that December 30 game.

Prior to last year, Clemson had not played in the ACC tournament in Greensboro since the 1998 ACC Tournament when the Tigers defeated Wake Forest in the first round,then lost to number-one ranked Duke in the semifinals. That is the last time Clemson advanced to the ACC semifinals. A numberone ranked Duke team won that semifinal game 66-64 on a driving shot by William Avery with just one second left. That was Clemson’s third loss by four points or less to Duke that year.