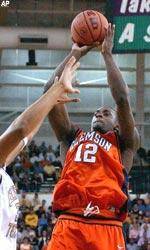 Beating Clemson gave Georgia Tech the fifth seed in the upcoming ACC tournament in Greensboro, N.C. The Yellow Jackets will face North Carolina State in the first round Friday afternoon.

Clemson (15-12, 5-11) lost its fourth straight and fell to 1-13 in its last 14 ACC road games. Olu Babalola led the Tigers with 17 points and Chey Christie added nine. Clemson won’t know its first-round opponent until Sunday when No. 10 Duke visits North Carolina and No. 13 Maryland plays at Virginia.

The Tigers’ biggest lead, coming midway through the first half, made it 23-17 on Tomas Nagys’ 15-footer.

Cremins, who now lives in Hilton Head, S.C., and works as a television analyst, was honored after the game as the institute renamed the Alexander Memorial Coliseum floor as Cremins Court.

Former players Mark Price, Kenny Anderson, Dennis Scott, Tom Hammonds and Craig Neal were among several thousand people who stayed after the game to honor the coach who retired after the 1999-2000 season with a 454-307 record, including 354-237 in 19 seasons at Georgia Tech.

Cremins retired with the third-most wins in ACC history.