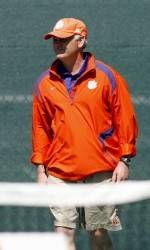 CLEMSON, SC – Clemson Head Men’s Tennis Coach Chuck McCuen has been inducted to the Flagler College Athletic Hall of Fame in ceremonies over the weekend.

At Flagler, McCuen lettered in tennis for two years after transferring from Gainesville Community College. In 1982, he was earned NAIA All-America and Scholar-Athlete honors. He graduated from Flagler with degrees in recreation management and history.

McCuen has excelled as a coach, first at Georgia State University (1984-2002) and currently at Clemson University. At GSU, McCuen coached the team to five conference championships and three NCAA Tournament appearances in a four-year span.

In 2010, Clemson won 15 straight matches to start the season, the second best start in school history. The Tigers are 17-10 this season.

He compiled a 261-162 record in 19 years as a head coach for the Panthers. McCuen is in his eighth year at Clemson, and his second year as a head coach.

Chuck and his wife, Dr. Linda McCuen, have a daughter, Lauren, who is a special education teacher in Charleston, S.C.