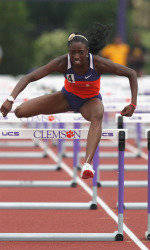 GAINESVILLE, FL – Clemson received runner-up finishes from Ty McCormack and Bridgette Owens in their respective events Friday to lead the Tiger track & field program’s efforts at the Pepsi Florida Relays from Percy Beard Track. In addition, a total of four student-athletes recorded personal bests and ascended Clemson’s all-time performance lists across various events on day one of the meet.

Owens was runner-up in the women’s 100-meter hurdles. In windy conditions, the sophomore posted a time of 13.26 and was the top collegiate performer, finishing only behind adidas sprinter Tiffany Porter. Keni Harrison also competed and was 14th out of 63 participants (13.83) against a -1.0 meters per second wind.

McCormack was runner-up in the men’s 3000-meter steeplechase late Friday. It was his first time competing in the steeplechase in 2012. He had a personal best with a time of 8:59.65, moving him ahead of Matt Hughes for eighth in the Clemson record books.

Jameel Abdul-Mateen had an impressive effort out of the gate in the men’s long jump on his way to a fifth-place finish. The native of the Peach State had a jump of 23’11.5″, best among three Tiger freshmen in the event. April Sinkler was fourth in the women’s long jump, with a leap of 20’3″ against a -1.7 wind. It was her only non-foul in six attempts. Jasmine Brunson was ninth (19’6″).

In the women’s pole vault, freshman Caroline Bond was the only Tiger out of four to clear her opening height. Bond went on to clear the bar at 12’3.5″ and finish in a tie for eighth place.

Brittney Waller was seventh in the invitational section of the women’s discus throw Friday evening. She had a toss of 150’11”. Waller is scheduled for the hammer throw Saturday at 11:30 AM.

The Tigers return to action for a full slate of men’s and women’s relays Saturday, as well as some field events at James Pressly Stadium. It will be Clemson’s final day of competition prior to competing in the ACC Outdoor Championships in two weeks in Charlottesville, VA.