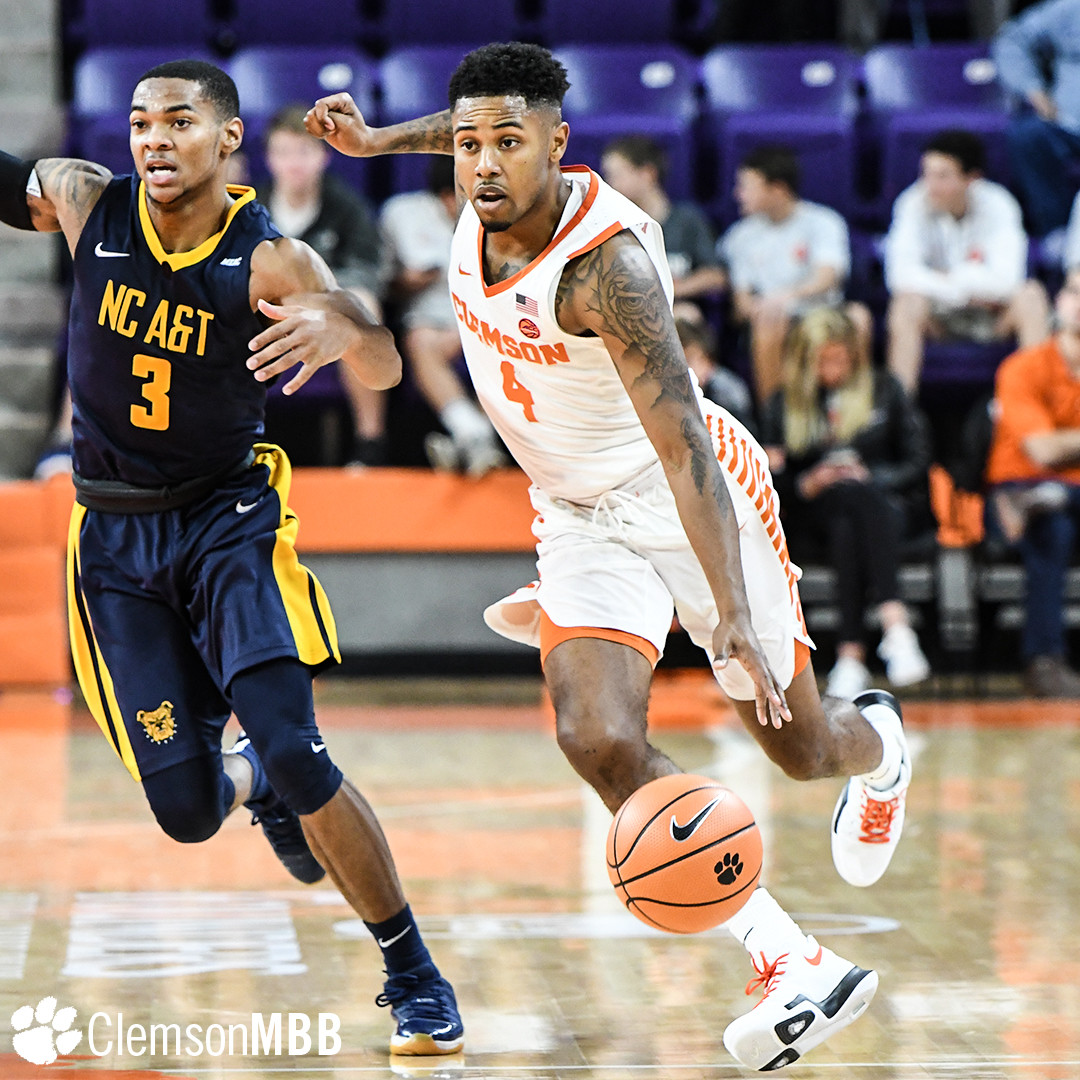 GAMEDAY SETUP CLEMSON (2-0) vs. OHIO (1-0) Date: Thursday, November 16 Tipoff: 5 p.m. ET Arena: TD Arena (5,100) Radio: CTN (William Qualkinbush-pbp; Terrence Oglesby-color) TV: ESPN2 (Doug Sherman-pbp; Cory Alexander-color) • For the second time in as many games, Clemson will face an opponent it had never faced in program history when it takes on Ohio on Thursday.• The Tigers are 6-2 all-time against members of the Mid-American Conference (MAC).• Under the direction of head coach Brad Brownell, the Tigers are a combined 61-28 (.685) in the month of November since the beginning of the 2010-11 season.• This will mark the third appearance in the Charleston Classic for the Tigers. Clemson won the event in 2008 and reached the tournament final in 2013.

TIGER TRACKS • Clemson utilized five double-digit scorers and 21 assists on 33 field goals to rout the Aggies of North Carolina A&T on Sunday, Nov. 10, 87-63.• Donte Grantham and Gabe DeVoe posted double-doubles – the second of both of their careers. Grantham grabbed a career-best 12 rebounds, while DeVoe tied his career-high with 10 boards.• Through two games, Grantham is shooting 80.0 percent (12-for-15) from the floor. Elijah Thomas is right behind – shooting 76.9 percent (10-for-13).• Grantham and Thomas are ranked fourth and fifth in the ACC, respectively, in field goal percentage.• The Tigers have reached the charity stripe 20+ times in both games this season and are shooting nearly 76.0 percent from the line.• Clemson topped the 85-point plateau on seven occasions last season, but have eclipsed that mark in both games this year.• The Tigers carry a positive assist-to-turnover ratio of 1.3 – posting 35 assists this season compared to 28 turnovers.• Clemson ranks in the top five of the ACC in seven categories through two games.• The Tigers rank well in offense and are fifth in the league in scoring (86.0 ppg) and fourth in field goal percentage (53.1 percent).• Defensively for the Tigers, they rank second in defensive rebounding (27.0 rpg) and are fourth in steals (8.0 spg).• Shelton Mitchell is averaging 6.0 assists per game and ranks sixth in the league, helping the Tigers to a fifth-place overall ranking in assists.• Head coach Brad Brownell is just seven wins shy of 300 for his career.