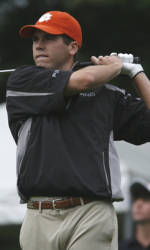 Clemson, SC – Clemson senior Ben Martin fired a two-under-par 68 at Southern Hills Country Club in Tulsa, OK on Tuesday and qualified for the match play portion of the United States Amateur Championship. Martin shot a 34 on each side of the 7331 yard course and will be one of the top seeds for the 64-player match play championship that will begin on Wednesday. He was in sixth place as of 5:00 PM out of the 312 players in the field.

Martin had a 36-hole score of 141 after his opening round 73 at Cedar Ridge Golf Course also in Tulsa, the second course being used for the US Amateur stroke play qualifier.

It was a great day for Martin, who also played in the US Open at Bethpage Black as an amateur back in June. His day included a 25-foot birdie putt, a 45-foot hole out from a bunker, and a tee shot on a par three that finished just eight inches from a hole-in-one.

“I played well, it was a good day,” said Martin, whose father Jim is on the bag as his caddie this week. “And, it was good to play well at Southern Hills because that will be the site for the entire match play championship. It should give me some confidence going into Wednesday.”

Martin’s day started on the 10th hole and he responded with a birdie on the par four hole when he drained a 25-foot putt. “I was just trying to get it close to the hole. It was a 25 footer down hill with a break, and it just dropped in,” said Martin.

The native of Greenwood, SC made a birdie on the par five 13th hole when he hit a wedge within eight feet and made the putt. He slipped up on the 18th hole when he three-putted, but still finished his first nine at one under par 34.

After four straight pars to open the front nine, he bogeyed the par five fifth hole that is 652 yards in length. “I hit a poor drive and had to chip out. I still had 200 yards for a third shot and ended up with a bogey.

“But, I came back strong on the sixth and nearly made a one.” Martin’s tee shot on the par three hole that is 197 yards was straight at the hole and rolled to within eight inches of the cup. He tapped in for birdie. He then birdied the par four ninth hole when he holed a greenside bunker shot for 45 feet.”