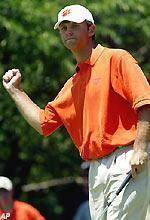 Delahoussaye, who played at Clemson from 2002-05, was Tigers’ highest ranked player in the world amateur rankings according to Golfweek heading into the spring of 2005 with a No. 10 rating. He turned pro after graduating from Clemson in 2005 and was a regular on the Nationwide Tour last year. He finished last year’s BMW Charity Pro-Am tied for 46th.

Hendrix is an Aiken, SC native who starred at Clemson from 2001-04. He turned pro following his 2004 graduation and competed in 24 PGA TOUR events in 2007 making the cut in seven. He also competed in four Nationwide Tour events in 2007, tying for seventh place in the Knoxville Open presented by Food City. Hendrix finished last year’s BMW Charity Pro-Am tied for 24th. He is currently competing on the Tarheel Tour, where he has played in four events. Hendrix was the State 4A champion, state junior champion and Carolinas Junior champion during his prep career at South Aiken High School.

Poole is a Spartanburg native who played at Clemson from 2002-06. He tied for 36th in the PGA TOUR’s Wyndham Championship last year and is currently competing on the 2009 Tarheel Tour where he has played in four events.

Haas, Jr. is the oldest son of legendary golf pro Jay Haas. The Greenville native played at Augusta State University and caddied for his father in the 1999 PGA Championship.

McGirt is a former Wofford College standout from 1998-01. He was named the 1998 Southern Conference Freshman of the Year and was selected to the 2000 All-Southern Conference team. McGirt has been a regular on the Tarheel Tour, winning the 2007 Cabarrus Classic.

The BMW Charity Pro-Am is the only tournament on the PGA TOUR’s Nationwide Tour where amateurs and celebrities are grouped with Nationwide Tour professionals in a four-day better-ball competition over three courses. Amateurs, celebrities and pros rotate between three courses on Thursday, Friday and Saturday, with the 14 lowest scoring pro-amateur/pro-celebrity teams advancing to play Sunday’s final round at Thornblade Club. Celebrities play once at each course on Thursday, Friday and Saturday. The professional winner of the overall 72-hole event will take home $126,000 from the total purse of $700,000, which is one of the largest purses on the Nationwide Tour. Amateurs and celebrities will compete for individual prizes and cash donations to the charity of their choice out of the 78 tournament beneficiaries selected by South Carolina Charities, Inc.

The first eight tournaments have raised $6.7 million for 125+ area charities.