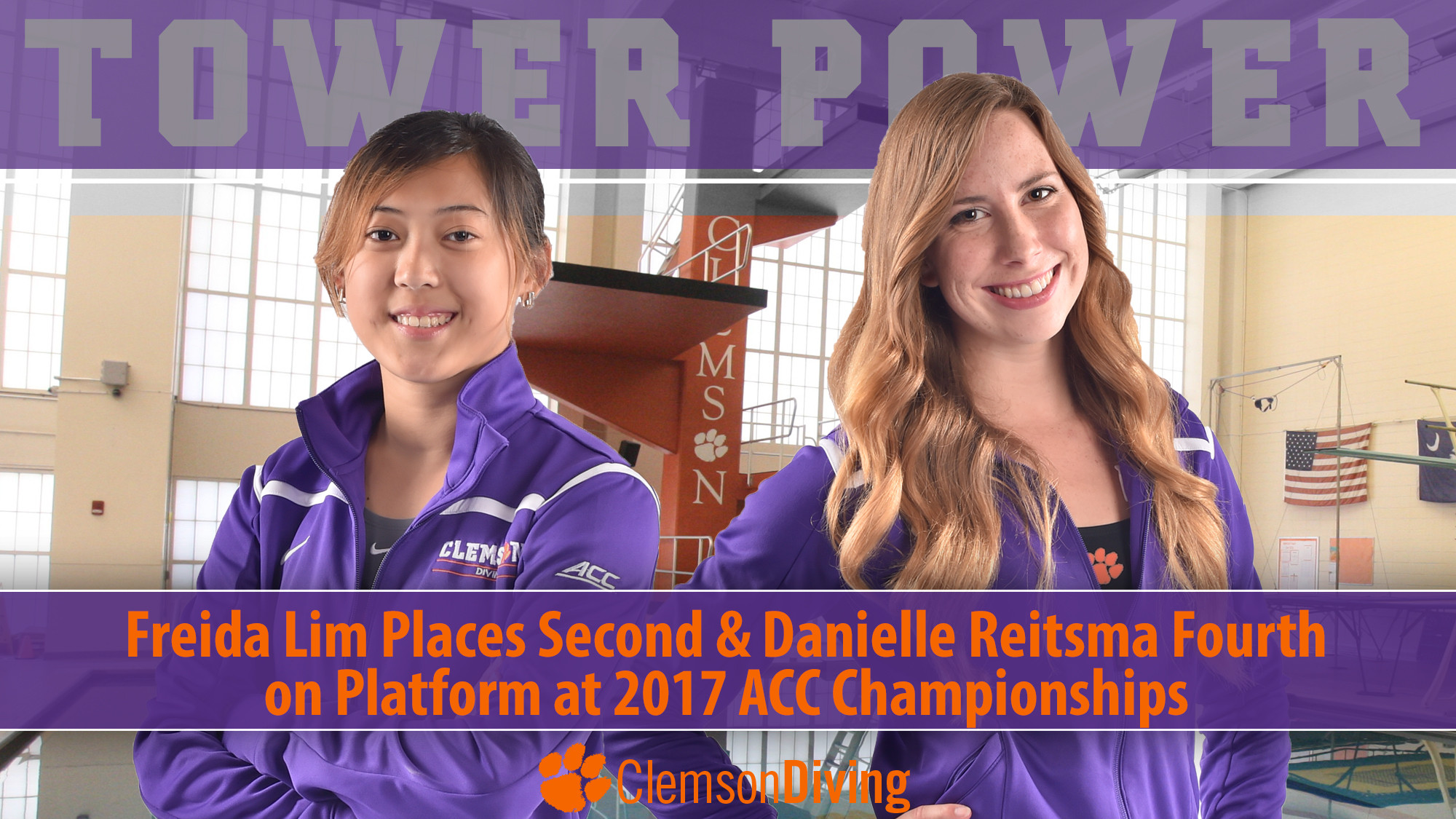 ATLANTA, Ga. – The Clemson diving team saved the best for last, as freshman Freida Lim and senior Danielle Reitsma placed second and fourth, respectively, in the platform finals on Thursday, the final day of competition at the 2017 ACC Championships in Atlanta, Ga. The second and fourth-place finishes are the best in Clemson diving program history, in any event. In the prelims earlier in the day, three other Tigers finished in the top-24, resulting in five individuals earning points toward the Clemson team score, also a program record for Head Coach Leslie Hasselbach Adams’ team.

Clemson was the only team with two divers in the field of eight in Thursday night’s finals, and Lim and Reitsma made the most of the opportunity. Lim scored 276.25 in the finals for second place overall and 28 points for the team. Reitsma posted a score of 252.20 in the final round to finish fourth with 26 team points.

In the preliminary round, juniors Allison Brophy and Megan Jendra and sophomore Morgan Fiske all finished in the top-24 to also earn valuable points toward the team score. Brophy placed 17th with a score of 207.35 and earned nine points. The junior from Cincinnati, Ohio has steadily improved in the platform each year at the ACC meet, from 35th place as a freshman in 2015, to 29th as a sophomore in 2016 to 17th this year.

Fiske took 18th place in the platform on Thursday, scoring seven points for the team with 206.75 points. The Pleasanton, Calif. native also made a dramatic improvement from her 2016 platform result, as she placed 33rd in the event as a freshman a year ago. Jendra finished in 24th place (187.05) for one team point.

The Tigers finished the 2017 ACC Championships with 144 team points. When calculating women’s diving scores only, that total places Clemson in third place among ACC teams. Florida State finished first with a team score of 194 and Duke edged the Tigers for second with 151 points. The third-place finish is the highest finish for the Clemson diving team in program history, as the team’s previous best was seventh place in 2016. The score is also 58 points better than Clemson’s team score from a year ago (86).

Nine different Clemson divers contributed to the Tigers 144 points, particularly impressive compared to a season ago, when just four divers scored the team’s 86 points. Reitsma led all Clemson divers in points scored in 2017, earning points in all three events, 26 in the platform, 25 in the one-meter and nine in the three-meter, for a total of 60.

Up next for the Tigers is the NCAA Zone B Diving Championship meet, held March 6-8 in Auburn, Ala. Several Clemson divers will be in action in Auburn, with a trip to the NCAA National Championships on March 16-18 in Indianapolis, Ind. on the line.