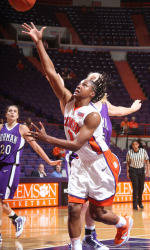 Clemson guard/forward Lele Hardy has been named to the Naismith Trophy preseason candidate list, as announced by the Atlanta Tipoff Club on Wednesday. The watch list, consisting of 50 student-athletes, was compiled by the Atlanta Tipoff Club’s Board of Selectors, which based its criteria on player performances from the previous year and expectations for the 2009-10 college basketball season. Hardy is one of nine ACC players on the list.

The Naismith Trophy, presented by AT&T, will be awarded at the 2010 NCAA Women’s Final Four in San Antonio, Texas. In late February, the Atlanta Tipoff Club’s Board of Selectors will compile a mid-season team of the Top 30 players in the nation. Then in March, the Naismith Trophy voting academy will vote to narrow the list to the four finalists.

Hardy was a third-team All-ACC selection and an ACC All-Defensive team member after recording 104 steals a season ago. She averaged 16.2 points, 8.4 rebounds, and 3.42 steals per game in 2008-09. Entering the season, Hardy needed only 40 more steals to move into first in Clemson history, and remarkably had 287 steals to only 275 turnovers prior to her senior campaign.

Hardy and the Tigers will take on South Carolina on Thursday night at 7:00 pm in Littlejohn Coliseum.