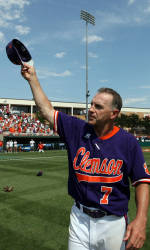 CHARLOTTESVILLE, Va. – Clemson head coach Jack Leggett has been named the 2010 ABCA Atlantic Region Coach of the Year. The Tigers’ mentor led his team to a 45-25 record and a berth in the College World Series in 2010.

In Omaha, the Tigers earned a top-four finish and posted a 2-2 record after succumbing to eventual national champion South Carolina. Clemson’s run in the College World Series included victories over No. 1-ranked Arizona State and sixth-ranked Oklahoma.

Clemson finished the season ranked as high as No. 4 nationally. It marked the program’s second-highest ranking to finish a season.