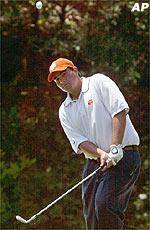 Larry Penley and Jack Ferguson Represent US In 2004 Palmer Cup

Head Golf Coach Larry Penley, and rising senior Jack Ferguson, arrived in Ballybunion, Ireland this past Tuesday, for the 2004 Palmer Cup, presented by monster. This year’s Palmer Cup will take place on the world-renowned Old Course at Ballybunion Golf Club in County Kerry, Ireland. The competition will begin Friday and continue through Sunday. The United States will face a team of amateurs who are college age that represent Great Britain and Ireland.

Live scoring, along with course information, pictures, bios, and quotes, can be found at http://www.collegiategolf.com, under the GCAA men’s link.

This is not Penley’s first time taking a team to another country for competition as he previously took a United States team to Japan. Penley was named the National Coach of the Year in 2003, and has been named District Coach of the Year and ACC Coach of the Year six times each, including 2004. His 2003 squad became the first program in NCAA history to win its conference, regional, and national championship in the same year.

Ferguson, a two-time second-team PING All-American, joins Coach Penley in representing Clemson and the USA in the Palmer Cup. This is his second consecutive summer of international play. Last year, he traveled to Japan for the Fuji-Xerox USA vs. Japan matches.

Ferguson started his summer off right with a win at the Sunnehanna Amateur, and recently was the medallist at the sectional qualifier for the US Amateur at Briar Creek Country Club in Raleigh, NC. Upon his return to the US, Ferguson will travel and compete in the US Amateur, which will be played played at Winged Foot in New York, August 16-22.

Joe Feaganes is taking on the role of assistant coach of the Palmer Cup team. Like Penley, he is in the GCAA Hall of Fame, and also is currently serving as GCAA immediate pas president. Mark Simpson serves as the tournament director, and is in his 27th year as head coach at Colorado. In 2000, he was named the Co-Big 12 Coach of the Year, and has taken the Buffaloes to 12 NCAA’s. Simpson served as the team leader for the 2000, 2001, and 2002 Palmer Cups.

Joining these coaches and Ferguson on the Palmer Cup team are: