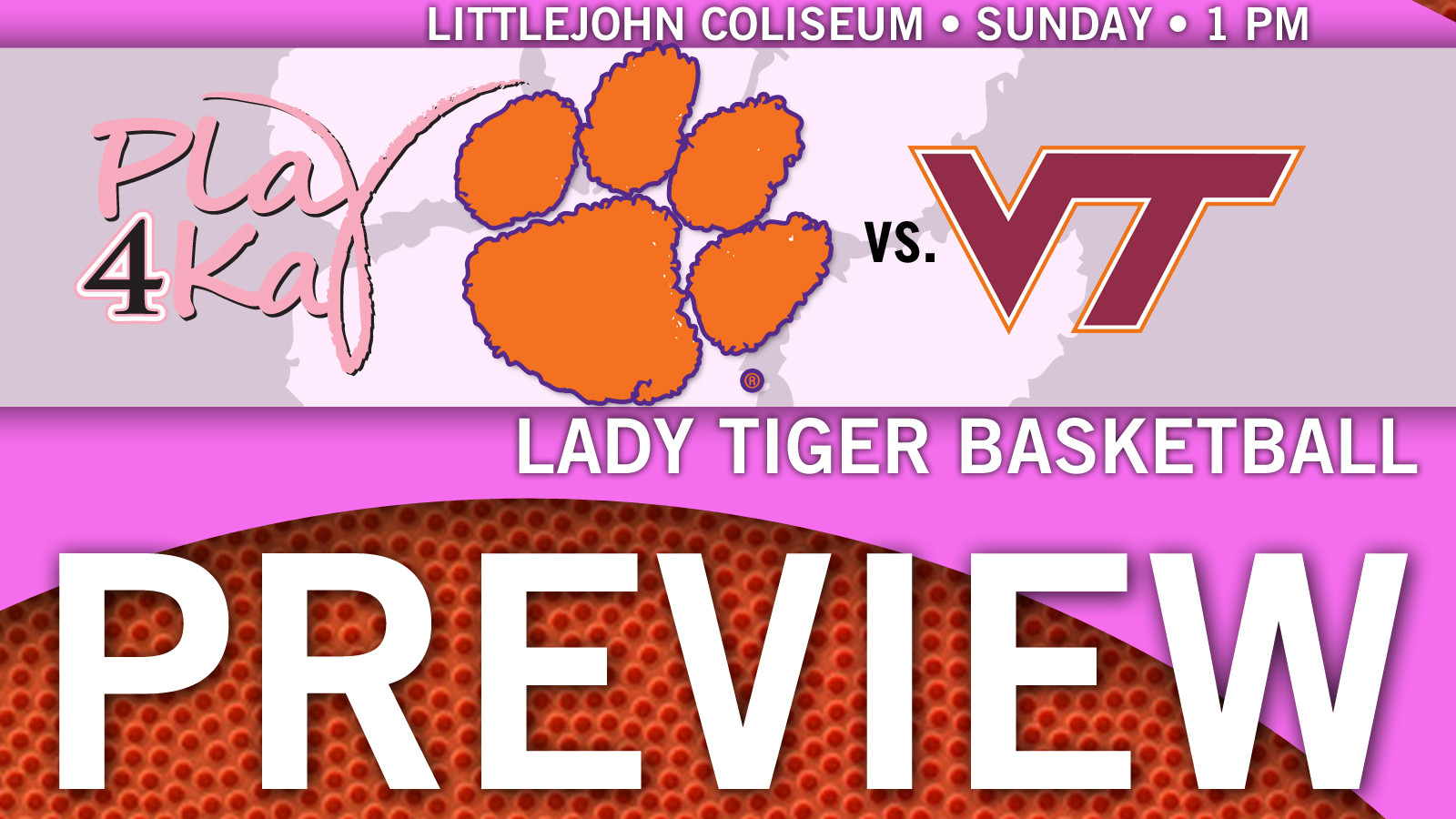 CLEMSON, SC – The Clemson women’s basketball team will play host to Virginia Tech on Sunday at 1:00 pm in Littlejohn coliseum. The game will be played as part of the Play4Kay initiative, and all fans are encouraged to wear pink, and will receive $1.00 admission for doing so.

Clemson (6-18, 2-11 ACC) and Virginia Tech (8-16, 2-11 ACC) meet for the second time this season, just 17 days apart. Clemson won the earlier meeting, 47-37, in winning a second consecutive ACC road game by double-digits. The win was the second in a row for the Tigers in Cassell Coliseum, as they new press for their third straight win in the series overall.

The game will be broadcast on TigerCast on ClemsonTigers.com, and will be on the Clemson Tiger Sports Network on the radio. Fans can also listen in and follow live stats on the Official Clemson Tigers App. The game will precede the men’s game with No. 3 Miami, which takes place at 6:00 pm in Littlejohn.

The series is knotted at 7-7 all-time, with the Hokies holding a 4-3 edge in Littlejohn, and Clemson with the 4-3 lead in Cassell.

In the game little more than two weeks ago, Clemson put forth one of the best defensive efforts in school history, holding the Hokies to just 37 points. It was the fewest points allowed in a game by the Tigers since 2008, and fewest in an ACC game since 1994.

Nikki Dixon (13.2 ppg) and Quinyotta Pettaway (10.2 ppg) continue to lead the Tigers offensively, while Aisha Turner has guided the offense to the tune of 3.4 assists per game, which is the second-most among any league freshman.

More on Play4Kay from the ACC:

“Before her passing on January 24, 2009, Coach Yow, along with her teammates the WBCA and The V Foundation, achieved the feat of uniting thousands in the fight against women’s cancers. The movement continues to grow and change lives each and every year during the month of February. The Play4Kay initiative, formerly known as the WBCA Pink Zone, showcases women’s college basketball throughout the nation, with proceeds going to the KayYow Cancer Fund. Coach Yow shared her goal of raising $5M through the Play 4Kay initiative, and to date, $8 million has been raised. Each of the ACC’s 12 schools are dedicating one of their home women’s basketball games toward the initiative in 2013.”