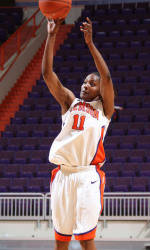 CLEMSON, SC – Lele Hardy recorded a double-double with 10 points and 11 rebounds, but the Lady Tigers were held to their fewest point total in history, falling to Florida State, 63-39, at Littlejohn Coliseum on Sunday afternoon.

“We were just really flat tonight,” said Clemson Head Coach Cristy McKinney. “We took some good shots that just did not go down. We were able to hang in there for a while with some good defense, but this wasn’t the same team that played against Wake Forest and Virginia Tech.”

Florida State (12-6, 3-1 ACC) was led by Tanae Davis-Cain in her first game back from a nine-game suspension. The Seminole junior had 14 points on 4-of-9 shooting and drained all six of her free throw attempts.

Mara Freshour and Jacinta Monroe each added 11 points for Florida State on Sunday afternoon, while Cayla Moore had 11 rebounds to lead the team on the boards.

Hardy was 5-of-15 from the field as Clemson (9-11, 2-3 ACC) shot just 21.4-percent for the afternoon, its second lowest figure in program history. The sophomore from Spartanburg, SC also had four steals in the game.

Neither team started strong as the score was just 16-5 at the 6:00 mark of the first half. However, the Seminoles posted 11 points in the final minutes for a 30-9 lead at the break.

The Lady Tigers scored 30 points in the final period but could not overcome their first half showing.

Christy Brown and Whitney Hood each finished with seven points.

After a seven-day stretch in which they played three games, the Lady Tigers have eight days before their next contest. Clemson will play host to Boston College on Monday, Jan. 28.