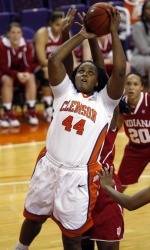 CLEMSON, SC – A 21-2 first-half Oakland run turned around an early back-and-forth game, and the Golden Grizzlies pulled away to win, 73-49, in Littlejohn Coliseum on Saturday afternoon. The Lady Tigers fall to 6-5 on the season, while Oakland improves to 8-4.

Clemson will leave on Sunday morning to head to Nassau, the Bahamas, where they will take on #2/#3 Baylor on Monday and #24/rv Syracuse on Wednesday. Both games are at 8:15 pm and will be available on the radio on WCCP-FM 104.9 and livestats will be at ClemsonTigers.com.

Clemson dropped its third straight contest with the loss to Oakland. The Tigers had only 13 turnovers in the game, but struggled from the field, going 19-60 (.317) in the game.

Junior Sthefany Thomas was held to just two points on 1-6 shooting in 21 minutes.

Oakland ran a solid motion offense, and converted 28-55 of their shots, the highest field goal percentage allowed by the Lady Tigers this season (.509). The Golden Grizzlies outrebounded Clemson, 45-25, and outscored the Tigers, 40-20 in the paint.

“We gave up too many layups,” said Itoro Coleman. “Oakland’s motion offense is designed to get those, but we didn’t do a good job defending them. In our defense, we want to force people outside, but allowed too many middle drives. If you give a good team open layups, they’ll make them.”

The Tigers went through an icy patch in the first half, missing 15 consecutive shots, during a 21-2 Oakland run, which turned a 17-14 Tiger lead into a 35-19 Oakland advantage. Clemson went without a field goal for almost 11 minutes in the frame.

Oakland also did a good job controlling the glass, outrebounding the Tigers, 23-12 in the half. The Tigers surrendered only six turnovers, a season low for a half. The Grizzlies hit 17-32 from the field, including 16-25 from inside the arc, and 24 points in the paint.

Wright and Mason each had six to lead the Tigers in the half, while Shelton had five points and three boards.

Clemson will leave after the game to head to the Bahamas to take on #2/#3 Baylor in the Sunsplash Tournament on Monday, and will take on #24 Syracuse on Wednesday in the same tournament.

“We’re getting ready to go the Bahamas. It’s a quick turnaround, and we are going down there to win, not to lay out on the beach. We get in tomorrow and practice, play Baylor Monday, practice Tuesday, and play Syracuse Wednesday, and we are viewing this as a business trip.”