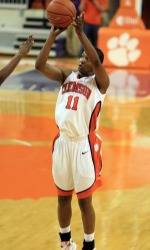 The Lady Tigers fell to 10-6 overall and 1-2 in ACC action while Florida State moved to 14-14 on the year with a pair of conference wins.

Lele Hardy led the Clemson effort with 12 points and eight rebounds while April Parker also added 10 for the afternoon.

“We just didn’t come out with enough intensity,” said Clemson Head Coach Cristy McKinney. “Rebounding has been a problem all along. We were never consistent as a team boxing them out.”

The Seminoles grabbed 17 offensive rebounds and had 47 total boards for the afternoon for a dominant day on the glass. Jacinta Monroe led all players with 10 while Mara Freshour added nine and Tanae Davis-Cain pulled down eight.

The Lady Tigers trailed by just one at 24-23 at the 9:04 mark of the first half, but Florida State went on a 17-2 run to take a commanding lead in the game. The Seminoles then held a 14-point advantage at the break (45-31). Davis-Cain drained four three-pointers for 16 points in the first half as the Seminoles hit five from long-range and shot 51.7 percent overall in the period. The Florida State senior finished with 21 points for the game as Freshour and Cierra Bravard stole the show in the second half.

Freshour knocked down a three-pointer to open the second half and then drained her only other one at the 16:21 mark to put the Seminoles up by 20 at 54-34. Clemson responded with an 11-1 run to cut the deficit to 12 as Morganne Campbell hit a three-point field goal from the left wing with 12:24 remaining.

However, Florida State recovered from the Lady Tiger rally to post the next seven points and go back up by 19. The teams traded baskets for the next three minutes, but the Seminoles held Clemson without a field goal for the final 6:15 to claim the victory.

The Lady Tigers will return to action on Thursday night as they play host to Maryland at Littlejohn Coliseum. The game is slated for a 7:00 pm tip off.