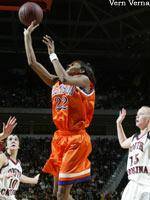 ATLANTA, GA-Sonja Mallory and Megan Isom both scored 23 points each in leading Georgia Tech to a 89-78 overtime win over Clemson in an Atlantic Coast Conference women’s basketball game at Atlanta, GA Thursday night.

Malory was 11-23 from the field and had 10 offensive boards. She finished the game with 14 total rebounds as the Yellow Jackets outrebounded Clemosn 50-27. Georgia Tech’s Alex Stewart had 13 points, 13 assists, and nine rebounds. Clemson was led in scoring by senior guard Chrissy Floyd with 18 points and four assists. Lakeia Stokes came off the bench and scored 16 points for the Lady Tigers. Stokes had four assists, five blocked shots and three steals.

Lakeia Stokes stole the ball and hit a layup and converted the free throw to give the Lady Tigers a 64-63 lead with 3:09 remaining. Georgia Tech had a 67-64 lead, but Chrissy Floyd hit a three-point goal to even the score 67-67 with 2:15 left. The Yellow Jackets’ Fallon Stokes put Georgia Tech ahead 69-67 with 2:00 minutes left. Clemson’s Amanda White hit two free throws to even the score again 69-69 with 1:40 left. Tech went ahead 71-69 as Mallory hit a field goal from underneath. Amanda White hit a jumper inside to even the score 71-71 with :40 seconds left. Georgia Tech was unable to score and Clemson had the ball with six seconds remaining. Stokes tried a shot at the buzzer but missed and the game went into overtime.