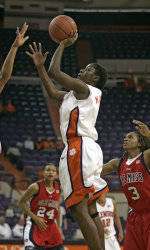 Lady Tigers Down Wagner, 94-66, In Women’s Basketball Action On Sunday

CLEMSON, SC – The Clemson Lady Tigers downed the Wagner Seahawks by a score of 94-66 on Sunday afternoon at Littlejohn Coliseum. The victory was Clemson’s fourth in its last five games, bettering the team’s record to 4-6 for the 2005-06 season. With the loss, Wagner dropped to 0-7 for the year. The Lady Tigers’ Maxienne White recorded a double-double with 23 points and 13 rebounds, both career highs for the Pensacola, FL native.

Ten different players scored for Head Coach Cristy McKinney’s team, with three in double figures. Along with White, Tasha Phillips and Julie Talley posted 13 and 12, respectively. Phillips and Talley have now scored at least 10 points in each of the Lady Tigers’ last five games. Clemson outrebounded the Seahawks, 52-35, with White’s 13 leading the way for the Lady Tigers. Point guard Tasha Taylor, the ACC’s leader for assists per game, dished out 11 on Sunday afternoon for her second double figure assist total of the year.

Joy Gallagher led the Seahawks with 28 points on 10-19 shooting. Takesha Dye had a team-best nine boards while Jessie Collins handed out eight assists.

The Lady Tigers came out shooting cold to begin the game, while Wagner started strong in the first half. The Seahawks led 20-14 at the 8:45 mark but were unable to hold on. Clemson took a 26-25 lead on a basket by White with 3:54 remaining, but Gallagher knotted the score at 26 apiece with a free throw just seconds later. The Lady Tigers then scored 10 unanswered points to take a 36-26 advantage into halftime.

Clemson’s momentum continued into the second period as the team extended its lead to 19 points within the first five minutes of the half. The Lady Tigers then took a 29-point advantage at the 5:05 mark. A three-pointer by Susan Yenser put Clemson up 85-56. The Lady Tigers went on to win the game by a final score of 94-66.

The Lady Tigers return to action on Tuesday, Dec. 20 when they will face Winthrop at 7:00 PM at Littlejohn Coliseum. Clemson will then play host to Savannah State on Friday, Dec. 23 at 3:00 PM.