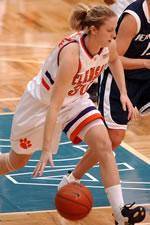 WINSTON-SALEM, N.C. – Julie Aderhold scored 19 points and Lakeia Stokes added 17 in leading Clemson to a 72-55 win over Wake Forest in a women’s Atlantic Coast Conference women’s basketball game at Winston-Salem, NC Sunday afternoon. Khaili Sanders had her second career double-double with 12 points and a career-high 12 rebounds for the Lady Tigers.

Aderhold was 8-13 from the field and 3-6 from three-point range. Stokes finished the game with four assists and scored in double figures for the 21st time this season. Clemson’s Carrie Whitehurst came off the bench and added 12.

Wake Forest was led in scoring by Tonia Brown with 11, and Erin Ferrell with 10.

Clemson maintained its lead and had a 40-33 advantage midway in the second half with 12:00 minutes remaining in the game. From this point Clemson went on a 20-10 run and had a 60-43 lead with 5:40 left. Aderhold had seven points in this Lady Tiger rally.