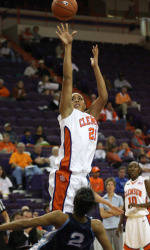 BOULDER, CO – April Parker totaled 31 points and 11 rebounds over the weekend, helping the Clemson women’s basketball team win the Coors Classic title and earning tournament MVP honors. The Lady Tigers (4-3) defeated Siena, 77-67, in the championship game on Saturday night at the Coors Events Center on the campus of the University of Colorado.

Parker was 7-for-10 from the field against the Saints for 15 points after recording 16 points and nine rebounds against Rice on Friday.

Morganne Campbell was also named to the all-tournament team after totaling 18 points, five assists, four rebounds and four steals over the two-day event.

The Lady Tigers opened the second half on a 13-6 run to take control of the game. They then extended the lead to 17 points, their largest advantage of the year, after a Hardy jumper at the 8:17 mark. Clemson endured another late Siena rally, as the Saints closed the gap to 73-65 with just over a minute left. However, the run was too little, too late as the Lady Tigers held on for their fourth win of the season.

Clemson led 37-33 at the break after being up by as many as 14. Lloyd dished off a pass to Parker for a lay-up at the six-minute mark to put the Lady Tigers on top, 32-18, but they scored just five points in the remainder of the half. Meanwhile, Menty scored 12 of her 22 first-half points as the Saints inched back to within two at 35-33.

Up next for the Lady Tigers is the Big 10/ACC Challenge on Thursday, Nov. 29. Clemson will travel to Michigan State to take on the Spartans in an 8:00 pm match-up.