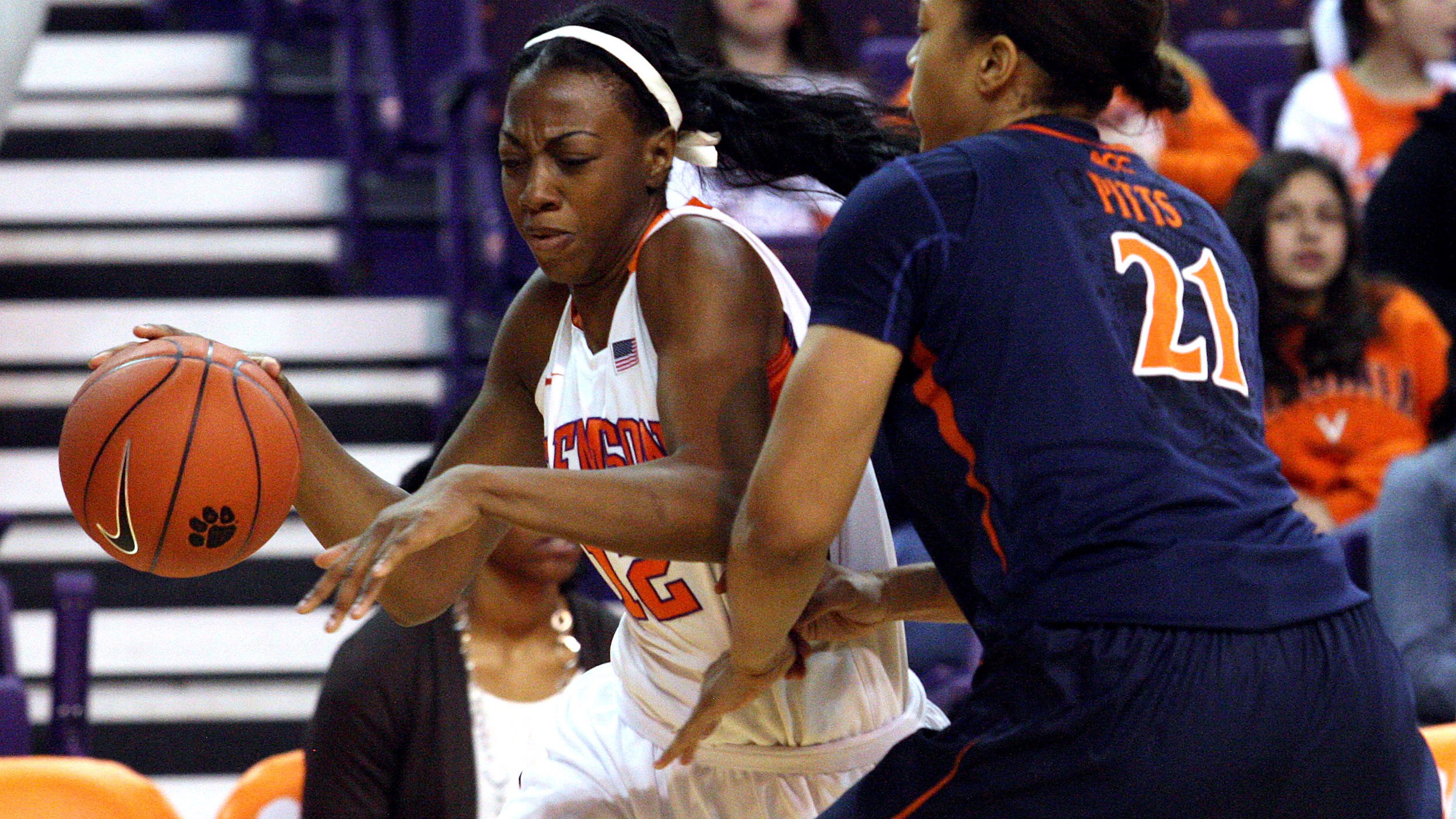 CHESTNUT HILL, MA – Clemson led by as many as 13 in the second half before Boston College (10-17, 4-12 ACC) came back to take a lead, but two key baskets late propelled Lady Tigers (9-18, 5-11 ACC) to their third straight win. The 64-61 decision was Clemson’s first ever win in five tries at Conte Forum, and the Lady Tigers improved to 3-7 against the Eagles all-time.

“I was really concentrated on us getting stops and executing on the offensive end,” said Head Coach Itoro Coleman. “It was all about our execution and stops. I felt like we played a good, solid 40 minutes today.”

Natiece Ford hit a crucial 18-footer with Clemson trailing by one with 1:06 to play, and Aisha Turner came away with a steal and a layup with 12.5 seconds left to give Clemson a three-point lead. Clemson had led 52-39 with 10:36 to play before the Eagles stormed back to take a 61-60 lead with 1:36 to play.

Clemson went without a basket for more than ten minutes as Boston College got back into the game, but the Lady Tigers were able to score from the line, going 8-12 from the line during the stretch, with all of those coming from post players.

Quinyotta Pettaway had 21 points to lead all players, while Nikki Dixon added 19 points, three assists and three steals. Aisha Turner added 13 points, four rebounds, and four steals in the contest as well, and hit all three of her three-point attempts.

“I felt like everybody who was on the court contributed. I just think it was a great team win. When everyone is playing their part, and playing it well, good things happen.”

Another key contributor was Charmaine Tay, who had a career-high eight assists against just one turnover in 32 minutes, while also pulling down a team-high seven rebounds.

Clemson has now won three ACC road games this season, and the five conference wins overall are the most since the 2003-04 season.

Boston College opened with a 9-5 lead in the first five minutes, as Clemson had a few turnovers early. However the Lady Tigers settled in, going on an 11-0 run over the next three minutes, taking a 116-9 lead into the under-12 media timeout.

Clemson took a 10-point lead as Turner made it 23-13 with 7:31 to play before Boston College responded. The Eagles went on a 14-2 run, taking a 27-25 lead with three minutes to play in the half. Dixon halted the run with a three-pointer, and then hit a layup off a BC turnover with 2:03 to play to give Clemson the 30-27 lead. Tiffany Ruffin hit a layup to pull the Eagles within one at 30-29, which set off a 7-0 Clemson run to end the half.

Pettaway hit a jumper with 1:00 left, and Clemson forced another turnover, with Turner drilling her third three of the half in transition from the left wing. BC chose to hold the ball for the last shot, but Dixon jumped a passing lane on a pass from Ruffin and took it the distance with 2.5 seconds on the clock to give Clemson the 37-29 lead at the half.

Clemson opened up a big lead in the second half, going ahead by 13 with 10:36 to play on a Chancie Dunn jumper. However, the Clemson offense went silent for more than ten minutes from the field, but the Tigers kept throwing it in the post and getting to the line. The Eagles got back in with three consecutive three-pointers.

Boston College pulled within three at 59-56 with 3:55 to play on a Boudreau three-pointer.

BC would later take the lead on a driving layup form Doherty, who had 12 of her 14 points in the second half. Ford drilled an 18-footer in response to put the Tigers back on top, 62-61. On the next possession, Clemson forced a turnover, and after coming up empty on the offensive end, Turner stripped Boudreau near half court and took it in for a layup to give the Lady Tigers a 64-61 lead with 12.5 seconds left.

Out of a timeout, Boudreau attempted a contested three-pointer with three seconds to play, which fell off the rima s time expired.

Clemson plays next at Georgia Tech on Thursday, and will close out the regular season at home on March 3 against NC State.