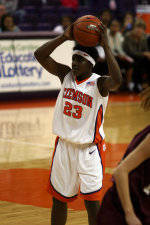 ORONO, ME – D’Lesha Lloyd had the shooter’s touch and Carrie Whitehurst caught fire late in the game as Clemson defeated St. John’s 95-88 in day one action at the Dead River Company Classic in Orono, ME on Friday afternoon. The Lady Tigers will face the winner of the Maine-Brown contest on Saturday at either 3:30 pm or 6:00 pm at the Harold Alford Arena on the campus of the University of Maine.

Lloyd led four double-figure Clemson scorers with a career-high 29 points on 14-22 shooting while also collecting a team-best 13 rebounds in the contest. Lele Hardy added 20 while Tasha Taylor posted 17 and Carrie Whitehurst finished with 10.

Tiina Sten was the Red Storm’s high scorer with 27 points and Joy McCorvey led the team with nine rebounds.

Clemson took the early lead at 10-5 and was ahead 14-8 at the 14:10 mark after a basket by Moreemi Davis. However, the Red Storm scored 18 unanswered points to go up 21-14 with 10:57 remaining in the half. The Lady Tiger drought was ended after Christy Brown stole a St. John’s inbound pass and passed the ball to Hardy for a lay-up underneath at the 9:47 mark. The field goal was the beginning of a 9-6 Clemson run that cut the deficit to four points at 27-23.

The Red Storm went back ahead by 10 at 33-23, but Lloyd drained five straight baskets for the Lady Tigers and completed a three-point play to tie the score at 35-35 with 2:11 left. A Taylor field goal put Clemson on top 39-38 at 1:08. Morganne Campbell then recovered a St. John’s turnover with just under a minute remaining. She laid it up on the fast break and was fouled on the play. Campbell sunk the free throw to give the Lady Tigers the 42-39 lead.

Clemson led 44-41 at the break, but St. John’s opened the second half on a 9-6 run to tie the game at 50 apiece. The teams were tied again at 57-57 with 12:32 remaining in game before the Red Storm outscored the Lady Tigers 17-10. Clemson caught the Red Storm at 75-75 with just under six minutes remaining on a jumper by Lloyd, and the Lady Tigers then took the lead at 77-76 on another Lloyd basket. Whitehurst then drained a short jumper and back-to-back three-pointers to put Clemson on top by five at 85-80 a 3:23 mark.

The Lady Tigers increased their lead to 10 on a free throw by Hardy and converted free throws down the stretch for their second victory of the season.