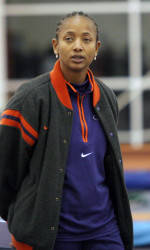 Clemson, SC – The Lady Tiger track & field program signed two prospects to National Letters-of-Intent in the spring period, as announced by Head Coach Marcia Noad on Wednesday. Stephanie Buffo of Spartanburg, SC and Allison Lake of Saluda, SC will join the group of five that signed with Clemson in the fall, giving the Lady Tigers a solid recruiting class once again.

Buffo led Dorman High School to a state title in cross country in 2004 as a sophomore. She was runner-up at the state cross country championships in 2003 as well. In 2006, she earned All-Region and All-State honors in cross country. A two-time All-State selection in track, she has also qualified for the state 4A meet in the 3200m again this season. She is Spartanburg County’s record-holder in that event. Buffo was also named All-Area and All-Academic by the Spartanburg Herald-Journal for her efforts during the 2006 cross country season.

“Stephanie has good running mechanics and will develop into a strong collegiate runner,” Noad said. “We look for her to come in and have an immediate impact on raising the level of our cross country and distance program. She is an excellent student who we expect will perform very well in the classroom.”

Lake signed with the Lady Tigers out of Saluda High School. She recently qualified for the 2A state championships in the shot put after winning the event at the Upper State meet. Lake was fourth in the 2006 state championships and also runner-up in the region this season in the event. She is expected to not only compete in the shot put, but also in the discus at Clemson.

“We think Allison is going to develop into a very solid and competitive thrower for us,” Noad believes. “As her fitness and strength levels improve, she will be able to make use of her height and levers, and be able to develop technically. She is a great student as well.”