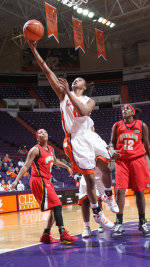 Imagine how she’d have felt had the Terps lost instead of leaving Littlejohn Coliseum with their eighth straight victory over Clemson, 65-56, Thursday night.

“It’s kind of hard to find any positives in this,” said Coleman, who scored 19 points to lead Maryland.

Still, you had to wonder why a Maryland team that seemed so alive in a tight, 68-65, loss at Duke on Monday would bumble its way through this.

The Terps (14-3, 2-1 Atlantic Coast Conference) had hoped to tap into their fiery play from the other night to handle the Tigers (10-7, 1-3). But neither team showed any spunk and the contest devolved into a battle to see who’d make fewer mistakes.

Maryland finished with 22 turnovers and hit just 3-of-13 from behind the arc. It saw an early 13-point lead slip to 56-52 in the final minutes.

That’s when Coleman and Lynetta Kizer, who scored 15 points, took control and made sure the Terps didn’t start 1-2 in the league for the first time in six seasons.

When the Terps opened up a 23-10 lead, the game looked like it might turn into a rerun of last season’s 110-46 Maryland victory.

Instead, the improved Tigers took advantage of Maryland’s lackluster play to get within striking distance, trailing just 51-47 on Lele Hardy’s 3-pointer with 2:48 left.

Kizer made two foul shots to extend Maryland’s margin. Then, after Hardy followed with another 3, the Terps answered with a pair of free throws from Kristi Tolliver and a 3-pointer by Coleman that made it 59-52 in the last minute.

“This was a tough game,” Maryland coach Brenda Frese said. “We barely hung on tonight. I am very disappointed in how we played.”

Frese expected her club to come out with the crispness it showed at Duke, a matchup of ranked teams who regularly contend for the top of the ACC.

Coleman acknowledged that remembering the Clemson game of a year ago may have contributed to her team’s malaise.

It could’ve also been the time on the road since Maryland bused to Clemson soon after the Duke loss and has spent the past few days working out and touring the area.

“You come into certain games thinking you don’t have to have the intensity and you can get the victory,” Coleman said. “That’s something we have to work on, no matter who we’re playing.”

Hardy led the Lady Tigers with 22 points. However, she and her teammates could not overcome their cold shooting.

A week ago, the Lady Tigers wiped out a double-digit lead against powerhouse North Carolina and were up a point with 5 minutes remaining. Clemson coach Cristy McKinney hoped her club would’ve built on that effort. Instead, they’ll carry a three-game ACC losing streak into Wake Forest on Sunday.

Demauria Liles added 11 rebounds with her 8 points for the Terps. Sa’de Wiley-Gatewood also reached double digits in rebounds with 10.

Frese knows her team can’t afford too many more efforts like this one if it hopes to contend for an ACC title. She vowed, loudly to her players in the locker room, that things would pick up.

“You want to come out and play as hard as you can,” she said. “You want to keep building.”