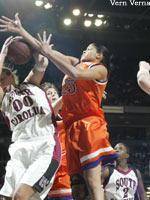 The Atlanta, GA, native registered 17 points in Clemson’s 60-58 loss to Auburn on Friday, December 27. The rookie forward was 8-16 (.500) from the field and made her only free throw attempt. Sanders pulled down 10 rebounds, including five offensive and had two blocked shots and one steal. Her 17 points was a career-high for the Lady Tiger freshman.