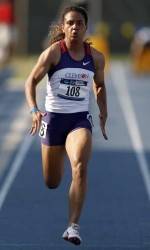 GREENSBORO, NC – A pair of women’s sprinters earned automatic spots in next month’s NCAA Outdoor Championships field to highlight day two of action for Clemson track & field at the East Prelims, held at the Irwin Belk Facility. The final two events – men’s and women’s steeplechase – were postponed indefinitely due to a major thunderstorm that moved into the Greensboro area approximately 8:25 PM.

Stormy Kendrick and Kristine Scott both earned their first-ever bids in the women’s 100m dash. Scott, who previously competed at the NCAAs in the 200, was the 12th and final athlete (11.46) to earn a spot in the Eugene field. Kendrick was runner-up in her heat with a time of 11.36. It marks the first time in school history two competitors from the women’s program have advanced to the NCAA Championships in the 100m dash in the same season.

Kendrick and Scott were joined by Michaylin Golladay as qualifiers for the quarterfinal round in the 200m dash. Kendrick (23.38) and Scott (23.47) earned automatic spots as top three finishers in their respective heats, while Golladay posted a time of 23.57 to earn a spot as one of the next fastest sprinters.

Golladay was impressive for the Tigers in the opening round of the 100m hurdles. The May graduate and native of Upper Marlboro, MD shattered her personal best with a school record time of 13.10 and sailed through to the quarterfinals (Saturday, 7:20 PM). She utilized an outstanding start and was smooth throughout her heat.

Charlton Rolle and Spencer Adams both advanced to the quarterfinal round of the men’s 110 hurdles. Rolle advanced with a time of 13.81, his best in a Clemson uniform and also No. 10 on the school’s all-time performance list. He previously ran a 13.68 at the University of Tennessee, however. Adams hit several hurdles during his run, and as a result his time (14.10) was much slower than his No. 5 East Region seed coming into the event. The 110m hurdle quarterfinals will be held Saturday at 7:05 PM.

The individual season ended Friday for Brittany Pringley and Sonni Austin in the women’s 400m dash and 400 hurdles, respectively. Pringley clocked a 54.43 and was 19th in the quarter mile. Austin hit a personal best with a time of 57.81 and finished 14th, a mere two spots shy of the final transfer position. Both will compete Saturday with the 4x400m relay at 9:45 PM.

Caroline Kennedy (Orlando, FL) made her final appearance in a Clemson uniform. The May graduate and school indoor and outdoor record-holder in the pole vault cleared 12’9.5″, but was on the outside looking in after missing three tries at the next height. Kennedy cleared 13 feet earlier this season, the first female in school history to achieve the height.

Alyssa Kulik and Stephanie Buffo were all set for the women’s steeplechase, but the event time will be pushed back after the massive thunderstorm. Kulik is the school record-holder in the event after clocking a time of 10:32.46 two weeks ago at Georgia Tech.

The final day of action at the East Preliminary Round will be Saturday. Clemson will have three relays participate, including the ACC Champion women’s 4x100m group at 6:15 PM. The men’s and women’s triple jump will also be held Saturday.