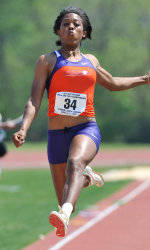 CLEMSON, SC – Josh Fowler and Jasmine Brunson won the men’s and women’s long jump competitions Friday with personal bests to highlight day one of action at the Orange & Purple Classic. Also on Friday at the Rock Norman Track Complex, middle distance runners Chris Slate and Jasen Turnbull became the first men’s team competitors from Clemson to go under 1:50 in the 800 meters since Davidson Gill last did so for the program in 1999.

Slate and Turnbull were in the middle of the pack after the first quarter of a mile, but both came on over the course of the final 200 meters to finish 1-2. Slate moved to the No. 6 position on Clemson’s all-time performance list with a time of 1:49.28. Turnbull crossed the line right behind in 1:49.62, a time that stands eighth in school history.

Fowler hit his personal best in the men’s long jump, with his sixth and final attempt of the late afternoon. The ever-improving junior from Inman, SC had a leap of 24’9.5″. His mark placed him inside the school’s all-time top 10 in the event. Will Robinson also competed in the event for the Tigers and came away with a fifth-place showing (21’11.5″).

Brunson was impressive in winning the women’s long jump title Friday. The freshman from Southampton, Bermuda had a top mark of 19’11.75″, which moved her from 10th on the school’s all-time performance list to No. 7 for the outdoor long jump. She passed teammate Patricia Mamona on the all-time performance list with her effort. Fellow freshman Karine Farias was runner-up, also with a personal best (19’0″).

Alyssa Kulik improved on her personal best in the steeplechase, as she finished runner-up in the event Friday afternoon. She had a time of 10:40.71, still the second-best time in Clemson history for the event. Stephanie Buffo, school record-holder, placed third on Friday. Bryce Iverson, who earned his undergraduate degree Friday, won the men’s steeple with a time of 9:31.36.

Candace Sapp was runner-up in the women’s 800m with a time of 2:18.35. She was followed by distance All-American Kim Ruck, who turned in a time of 2:19.38. Ruck was scheduled to compete in the 5K, but was pulled from the event on Friday and will now run the 1500m on Saturday as well.

Brittney Waller captured the women’s discus throw on Friday with a mark of 142’5″. In the men’s competition, multi-event standout Miller Moss was second with a throw of 130’11”. It was a season-best in the event for Moss, the ACC’s runner-up and Clemson’s school record-holder in the decathlon.

The teams return to action on Saturday, where several of Clemson’s recent graduates will compete beginning at 10 AM in the field events and 12 PM on the track.