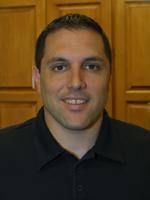 In his three years on the Dayton staff under Purnell, the Flyers amassed a 66-30 record, and made three consecutive postseason appearances. In 2002-03, Dayton won the Atlantic 10 Tournament and advanced to the NCAA Tournament as a top-four seed. They had a 14-2 regular season conference record and won 24 games, most by a Dayton team since 1966-67.

Postorino was the first player Purnell signed as Dayton’s head coach. He lettered all four seasons (1995-1999) at Dayton, but his career was cut short due to complications with a cyst in his brain. He played 29 games as a freshman, 26 as a sophomore, 19 as a junior and just one as a senior. Postorino started the final home game of his senior season.

While sidelined, Postorino foreshadowed this career move, remaining active with the team and giving the younger Flyer point guards the benefit of his experience, and his passion for the game. After graduating from Dayton with a marketing degree in 1999, Postorino worked in private business in the Dayton area before joining Coach Purnell’s staff.