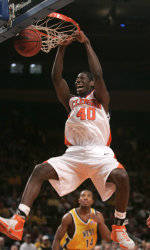 James Mays Declares for NBA Draft, Does Not Hire an Agent

Clemson, SC – Clemson junior forward James Mays has filed the necessary paperwork to make himself available for the 2007 NBA Draft, Head Coach Oliver Purnell announced Wednesday. Mays has not signed with an agent, thus leaving the option of returning to school open. The deadline for underclassmen to withdraw from draft consideration is June 18. The NBA Draft will be held at Madison Square Garden in New York City on June 28.

“James had been leaning toward this decision,” Purnell said. “I’ll help him get as much information as possible. Certainly, it should be something he should strongly consider if he’s going to be a first-round selection.”

The 6’9″ Mays was a second-team All-District selection and honorable mention All-ACC performer this past season while helping the Tigers to a 25-11 overall record. He averaged 12.2 points and 6.4 rebounds per game. He also established Clemson single-season records for assists (95) and steals (69) by a frontcourt player.

“I feel this is an opportunity for me to explore my options,” Mays said. “This will give me a chance to evaluate where I stand as a player. If I don’t do as well as I hope to, by not signing with an agent, I will have a great opportunity to remain at Clemson and finish my college career.”