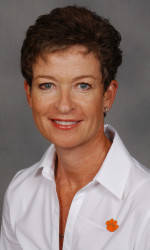 Clemson, SC – Dr. Loreto Jackson, Director of Student-Athlete Performance at Clemson University, has been named one of 12 recipients of the 2009 National Sports Ethics Fellows. The honor is given by the Institute for International Sport (located at The University of Rhode Island) and The Positive Coaching Alliance at Stanford University.

The release states, “Loreto Jackson was tasked with developing the student-athlete standard of conduct policy at Clemson University. She wove the Clemson values of family and civility into the Department’s Solid Orange sportsmanship initiative to articulate a behavior expectation for Clemson student-athletes.

“The resultant definition: Our actions honor our University, traditions, teams, performance, people and each other provides behavioral guidance for student-athletes. Furthermore, following the University President’s call to create an `environment that is spirited and fun, but also shows respect for teams, the University and the traditions that make Clemson special’, the Solid Orange creed has also been embraced by the Clemson community as a whole.

“That the President’s goal is being met is evidenced by the University receiving two national sportsmanship awards, and numerous letters from visiting fans regarding their positive experience while traveling to Clemson University.

“Solid Orange is now a way of living at Clemson.”