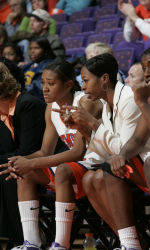 “I certainly have mixed emotions about leaving,” Coleman said. “I will miss the Clemson fans and Clemson will always be a part of me, but the Penn State position was a great opportunity that I could not turn down. I want to be a head coach one day and this is a step in the right direction.”

“I was very impressed with Coach Washington. Her visions align with mine in terms of professional goals and I am looking forward to working with her.”

Coleman returned to Clemson in a coaching capacity in 2002 after an extremely successful playing career as a Lady Tiger. She led Clemson to a pair of ACC Tournament championships, the Lady Tigers won the conference title her freshman year, in 1996, and her senior year, 1999. Coleman, formerly Itoro Umoh, was named the tournament’s MVP as a senior, in addition to being a first-team All-ACC selection. That same season, she was an honorable mention AP All-American. She was named to the ACC’s 50th Anniversary team in 2002.

As a coach, she helped the Lady Tigers to a 17-12 record and a WNIT appearance in 2002-03, her second season on the sidelines. As an assistant in 2002-03, she guided Chrissy Floyd to first-team All-ACC honors, while helping Lakeia Stokes earn the same honor in 2003-04.

Coleman played in integral part in the signing of Clemson’s 2007 recruiting class, which was ranked a top-25 class by the All-Star Girls Report. She was also instrumental in bringing in Lele Hardy , who earned ACC All-Freshman honors for the 2006-07 season while setting numerous school freshman records.

“Obviously we hate to lose Cristy McKinney said. “She is a talented young coach with great ties to Clemson. The Penn State position is a step up for her professionally and a move she feels she needs to make at this time. I understand her decision and we all wish her well at Penn State.”

Coleman continued her career after college in the WNBA, playing for the Indiana Fever in 2001 and the Houston Comets in 2003. She also participated in several international competitions as a member of the Nigerian National Team, including the 2006 FIBA World Championships, the 2004 Summer Olympics and the 2000 Summer Olympics.

“Itoro is a great addition to our staff,” Washington said. “She is full of energy and has such a wonderful personality, which will carry over to our players, staff and fans. Itoro has proven herself to be a fine guards coach at Clemson as she has developed regional All-Americans. She also has strong skills as a recruiter and will help bring some of the best prep players in the country to Penn State.”