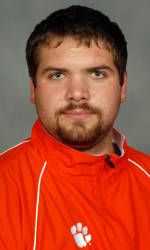 CLEMSON, SC – Clemson captured nine event titles Friday at the first indoor track & field meet of the season, the Roaring Tiger Opener. The Tigers spent a good portion of the meet competing student-athletes in longer sprints than normal. Multiple athletes competed in relays as well Friday, making it a full evening of action for the men’s and women’s teams.

Clemson debuted a number of student-athletes Friday, including three in the men’s 60m hurdles. Dailyn Moore of Sandusky, OH was the top finisher with a third-place time of 8.08 seconds. La’Mont Jackson (8.12) was fourth, while Marcus Maxey placed sixth (8.15). Moore improved two tenths over his preliminary time.

A pair of newcomers won the 500m dash events for Clemson. In the men’s race, freshman Jordan Rispress posted a time of 1:05.39 to win the opening section. He was fastest overall, topping teammate Miller Moss who had a time of 1:06.16. Rispress was a renowned intermediate hurdler at the high school level.

Brittany Pringley, a freshman from Miami, won the women’s 500m dash. She held off fellow freshman Sonni Austin in the opening heat. Pringley had a time of 1:16.24, while Austin was at 1:16.39. Multi-event athlete Liane Weber was solid, winning her section with a time of 1:16.53.

Mamona teamed with a trio of freshmen in the 4x400m relay to lead the Tigers to a first-place finish. She was joined by Rollins, Austin and Pringley in a team that turned in a time of 3:49.15. On the men’s side, Clemson’s second exchange was too much to overcome for Moss, Jackson, Maxey and Rispress. Charlotte held off a charge from Rispress over the final leg. Clemson’s time was 3:19.24.

The men’s 4x800m relay team won in dominant fashion, posting a time of 7:53.84. The relay consisted of Will Noble, Jasen Turnbull, Chris Slate and Ryan Mangone. After sitting out cross country season, Noble looked sharp on the opening leg and had a split of 1:56 in his return to action.

Clemson took home four first-place finishes in the field events. Alex Padgett won the men’s weight throw with a mark of 62’5″. He also won the shot put, as he recorded a distance of 55’8.5″. Brittney Waller, a freshman from J.L. Mann High School in Greenville, won the 20-pound women’s weight throw. She had a mark of 54’2″. Waller fouled on each of her three attempts in the shot put.

Moss was the Tigers’ top finisher in the men’s long jump, as he put together a leap of 22’9″. In the women’s long jump, freshman Jasmine Brunson was held out. Nakeisha Wineglass returned from injury to post a sixth-place jump (17’8″).

Caroline Kennedy and Amy Morrison both cleared 11’11.75″ in the women’s vault. Kennedy did so in fewer attempts, putting her third overall and Morrison fourth. Clemson did not have an entry in the men’s pole vault.

Linda Buchholz got her indoor season off to a solid start. The Germany native cleared 5’7.75″ to win the high jump, fending off Emily Smith from the College of Charleston.

The teams do not return to action until Friday, Jan. 8 for the Clemson Invitational. The Tigers will host a total of five meets during indoor season.