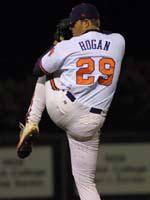 Clemson hit three home runs in the first five innings and added another long ball in the eighth to defeat Coastal Carolina Tuesday afternoon at Doug Kingsmore Stadium before 2,566 fans. Brad McCann and Tony Sipp each had two hits and scored two runs to lead the offense, while starting pitcher Kris Harvey improved to 4-0 on the season after 5.1 innings of three-hit ball. Mike Costanzo dropped to 2-1 for Coastal Carolina.

The Tigers started the scoring in the first inning. Tony Sipp led off with a single to left and Travis Storrer followed with a towering two-run homer to left field. The blast extended Storrer’s hitting streak to 10 games.

Clemson added a run in the third when Andy D’Alessio sent his first career home run over the fence in and off of the top of the batting cage in right center. Coastal Carolina got on the board with a solo home run by Brett Gordon in the fifth inning, but the bottom of the frame saw John Ingram connect on a shot to left field for a 4-1 Tiger lead. Ingram improved to 3-9 batting on the season with all three hits being home runs.

Coastal Carolina moved a run closer in the seventh inning. Chris Raber laid a bunt single down the third base line, stole second and advanced to third when Clemson catcher Lou Santangelo’s throw bounced of Raber. Gordon then singled to right to plate Raber and cut the lead to 4-2.

The Tigers answered in the bottom of the inning on a wild sequence of plays. Clemson had runners on the corners with two outs when Russell Triplett, the runner on first, attempted to steal second as right handed pitcher Byron Binda came set. Binda then stepped off the rubber and threw to shortstop Brett Grandstrand. Grandstrand then threw home ahead of Clemson’s Daniel Pritchard, who was trying to advance score during the rundown.

Pritchard slid under the tag of Chad Oxendine to score and Triplett advanced to third while Oxendine argued with the home plate umpire. Coastal Carolina head coach Gary Gilmore came out to argue, but it was Oxendine who was ejected for arguing. Triplett then advanced home before Binda’s next offering, giving the Tigers two runs over a four-minute sequence without a pitch being thrown.

Coastal scored two runs of its own in the eighth. Michael DeJesus scored on an error by first baseman Tyler Colvin, who had just entered into the game and Gordon drove in Costanzo on a single to right field. Reliever Patrick Hogan came in to stop the bleeding, striking out Jason Krohn with runners on first and second to preserve the 6-4 lead.

McCann then gave the Tigers breathing room in the bottom of the frame with a two-out, three-run blast to centerfield that made the final margin 9-4.

Clemson will now travel to Lubbock, TX, to take on Texas Tech in a three-game series beginning Friday. Fans can view a video webcast of the game through Texas Tech’s website at www.texastech.com. First pitch Friday is at 7:00 PM EST.