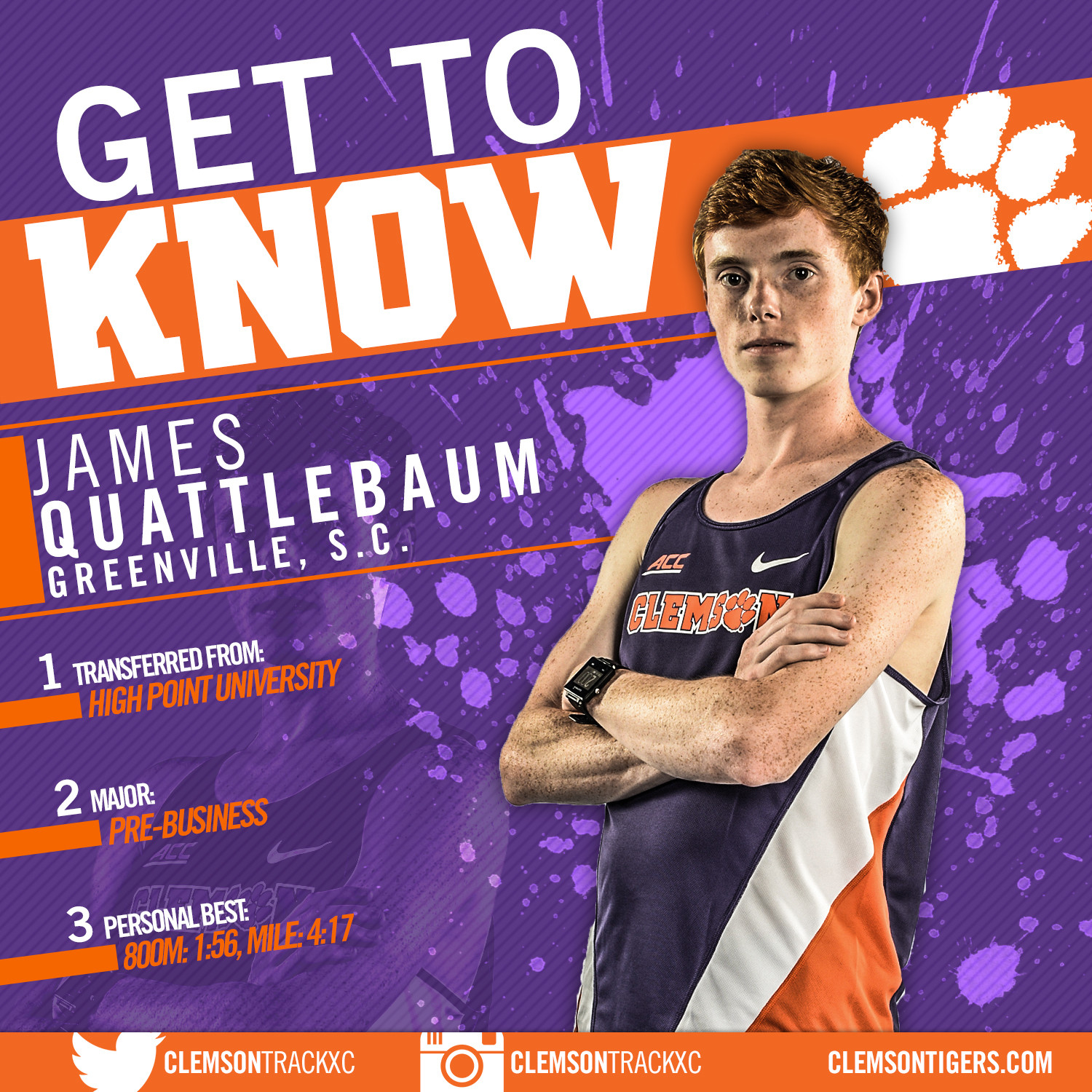 CLEMSON, S.C. – James Quattlebaum was about to start the seventh grade when his father told him he was going to join a sport, whether it be football or cross country in the fall. Due to his smaller frame at 13 years old, cross country was the easy choice.

Right off the bat, Quattlebaum found himself keeping up with the top kids on the team and his coaches, Rodney Ademee and Eric Guth, took notice. The Greenville, South Carolina native remembers keeping up with Coach Guth’s times throughout middle school and high school, as Guth would push him to strive for more.

“They helped me develop as a runner and as a person,” Quattlebaum said. But it was winning the state championships in eighth and ninth grade that fueled his competitive drive for excellence. Quickly, Quattlebaum knew and realized that with the proper amount of training, he had an opportunity to be the best in the state of South Carolina.

His senior year, Quattlebaum cruised through the cross country state meet, running 15:15.15 to take gold. He then defended his title as best in the state by taking gold in four events to assist Christ Church Episcopal School to its first ever state championship in track. Quattlebaum ran 2:00 in the 800m, 4:25 in the 1600m and a 9:40 in the 3200m.

Following high school, he went on to High Point University to run for the Panthers, where he finished fifth place finish overall in the Big South Conference (25:24.90) and 44th in the NCAA Southeast Regionals (31:16.40).

Soon after, the all-conference honoree decided he wanted something closer to his mom, dad and three siblings in Greenville that provided a lot of resources and opportunities for him to take advantage of.

Between his mom being a Clemson alum, his brother being a freshman at Clemson and having the opportunity to compete in a top cross country conference while attaining a prestigious education, he realized that Clemson University provided all of that and then some.

Now at Clemson, the sophomore joins the Tigers as a pre-business major with hopes of becoming a tech representative for a running company, or owning his own business following graduation.

“I made friends right off the bat, which was great,” Quattlebaum said. “They’re a really great group of guys that have great values and they’re going to do great things with running. They’re just awesome people to be around.”

Quattlebaum hopes to contribute as a top runner for the Tigers, and feels the competition on the team and within the conference will bring out the best in him as a competitor.

“Running here is going to propel me even further because I want to be at a higher level with the top guys here,” Quattlebaum said.

He’ll have the opportunity to showcase his talents on Saturday, September 4 when the Tigers head to Rock Hill, S.C., for its season opener at the Winthrop Challenge.