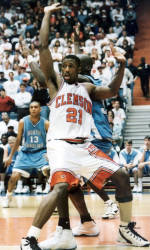 Clemson, SC – Former Clemson basketball great Greg Buckner was part of an eight player trade that sent the longtime NBA veteran from the Minnesota Timberwolves to the Memphis Grizzlies. With the trade, Buckner will be playing for his fifth NBA team heading into his 10th year in the league.

The trade was one of many completed last Thursday at the 2008 NBA Draft. Buckner, along with Marko Jaric and former All-Star Antoine Walker, were traded to Memphis along with the draft rights to Southern Cal guard O.J. Mayo. In exchange, the Timberwolves obtained the draft rights to UCLA’s Kevin Love, and acquired league veterans Brian Cardinal, Mike Miller, and Jason Collins.

This past season, Buckner played in 31 games for Minnesota while battling injuries that kept him out of several more contests. He averaged 4.0 points and 2.1 rebounds per game with four starting assignments. He missed nine games in December due to a calf injury, then his playing time was decreased due to a young roster. Buckner’s top performance in 2007-08 was November 6 against the Orlando Magic, where he scored a season-best 18 points on 7-13 shooting.

Buckner has now played for Dallas, Denver, Minnesota, and Philadelphia since being selected with the 53rd pick in the 1998 NBA Draft. He holds career averages of 5.4 points and 2.9 rebounds per game.

The Hopkinsville, KY native was a two-time, second-team All-ACC selection while at Clemson and started all 122 games of his outstanding career with the Tigers. He played on three NCAA Tournament teams and remains #4 on the Tigers’ all-time scoring list.