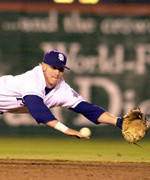 Former Clemson All-American and National Player of the Year Khalil Greene will begin his pursuit of a World Series Championship Ring on Tuesday when his San Diego Padres meet the St. Louis Cardinals in the first round of the National League Division Series. The game will begin at 1:00 PM in St. Louis and will be televised by ESPN.

Greene just finished his third season with the Padres. He had an injury plagued year at times, but still played in 121 games and batted .250 with 15 home runs and 70 RBIs. He had 30 doubles and two triples and posted a .971 fielding percentage, best of his short career. Now a .259 career hitter, his 15 home runs this year tied for the third most by a former Clemson player in the Major Leagues, and the most ever by an infielder.

Greene was one of five former Tigers to play in the Major Leagues this season. Minnesota Twins designated hitter Matt LeCroy played at Clemson from 1995-97 and he another solid season with 17 home runs and a .260 batting average for 101 games. The former Belton Honea Path star hit 17 home runs for the second time in his career (2003), the highest total ever by a former Clemson player in the Major Leagues. He now has 58 career home runs, third among former Clemson players in the Majors behind Tim Teufel (86) and Bill Schroeder (61). He finished his season strong with a 3-4 day against Detroit that included a home run.

Kris Benson, like Greene a former National Player of the Year, finished the year with a 10-8 record as a starting pitcher with the New York Mets. Benson had 95 strikeouts and just 49 walks in pitching 174.1 innings. He posted a 4.13 ERA for the season and now has a 4.25 career ERA. On the same day LeCroy had a 3-4 day at the plate with a home run (September 30), Benson pitched 7.1 innings and allowed just two earned runs in a victory over Colorado.

Matt White and Jeff Baker also appeared in the Major Leagues this year. Baker his .211 in 12 games with Colorado as a third baseman. His highlight of the year came in his first Major League game when he hit a home run against San Diego and had 2-5 night in a head-to-head game against Greene, his former teammate at Clemson from 1999-02. White pitched in one game this season with the Washington Nationals. He also appeared with the Boston Red Sox and the Seattle Mariners in 2003.