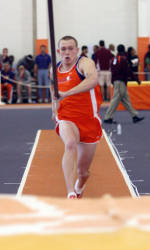 Blacksburg, VA – Mitch Greeley set a new national standard in the pole vault this season after clearing 18’1″ and winning the event at the Virginia Tech Elite Meet on Saturday. Greeley, the school record-holder both indoor and outdoor, earned his first-ever automatic qualification to next month’s NCAA Championships.

Greeley came into the weekend with the second-best mark among collegians, but overtook Rory Quiller of Binghamton with Saturday’s effort. Quiller’s top effort this season was 18’0.5″ on December 1. Greeley struggled on his opening height, but then cleared three straight heights in succession to defeat former Hokie vaulter Brian Mondschein.

Greeley’s effort gives the Clemson men’s team three automatic qualifiers to the NCAA Championships. Coming into this weekend, Clemson and Auburn were the only schools in Division I with two or more automatic qualifiers. C.J. Spiller have qualified for nationals in the 60m dash.

Three additional student-athletes from Clemson claimed individual event titles Saturday, marking a solid afternoon for the track & field program. Corey Brown won the 200m invitational with a season-best time of 21.58, matching Trenton Guy for the top time on the Tigers’ team so far this season. Brown’s previous best this year was 22.40.

Matt Hughes won the open section of the mile run. The newcomer from Canada had a solid time of 4:15.54. He was Clemson’s top finisher overall in the event, as fellow Canadian Matt Bruce was sixth in the invitational mile with a time of 4:20.08. The fourth event winner Saturday for the Tigers was Bryce Iverson in the 3000m run. The Manassas, VA native had a time of 8:21.57, second-best this season for any Tiger in the 3K event.

The 4x400m relay team finished runner-up after easily surpassing its top time of the 2008 indoor season. Cowin Mills, Andrew Porter, Travis Swaggard, and Brown delivered with a time of 3:13.47, falling to only Georgia in Saturday’s final section. Swaggard was third in the open 400m dash with a season-best time of 48.71.

Sam Bryfczynski was seventh in the 3000m run, while Jasen Turnbull came across 16th in the 800m run. Turnbull posted a season-best time of 1:56.81 in the half-mile event.

Overshadowed by Greeley’s record-setting performance in the pole vault was a nice effort by sophomore Chris Spear. He matched a season-best clearance with 16’6.75″ and was eighth overall in a strong field of vaulters.

Miller Moss was 11th in the long jump after hitting a distance of 21’10.25″ on his first attempt. He fouled on his final two jumps in the preliminary round. Alex Padgett finished ninth in the shot put after recording a toss of 50’1.75″.

The men’s track & field team will return to action February 15-16 to compete in the Tyson Invitational in Fayetteville, AR.