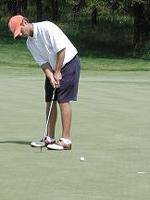 Golf Ranked Preseason No. 1 by Golfweek

Clemson will begin its defense of the National Championship as the nation’s No. 1 team, according to Golfweek. The top ranking marks the second consecutive year and third time in five years that the Tiger golf team has been ranked No. 1 heading into the fall season. The rest of the top 10 teams were (in order) UCLA, Florida, Oklahoma State, Georgia, Arizona State, Texas, UNLV, Augusta State, and Georgia Tech.

Golfweek also handed out preseason individual honors. Matt Hendrix was named first-team All-American, while Gregg Jones and Jack Ferguson were second-team All-Americans. In addition, the publication has Hendrix ranked as the nation’s No. 3 collegiate golfer heading into the season.

Hendrix, a native of Aiken, SC, finished ninth in last year’s final Golfweek/Sagarin ranking after earning third-team All-America honors as a junior. He had six top 10 finishes in 2002-03 and won the heralded Sunnehanna Amateur this past summer. Hendrix competed in the Walker Cup this past weekend, and posted a 2-0-1 record for the United States team.

Ferguson, a junior from Seneca, SC, earned second-team All-America honors as a sophomore. He finished fifth a year ago in the final Golfweek/Sagarin rankings. Ferguson had seven top 10 finishes in 2002-03 and was second only to D.J. Trahan with a 71.38 stroke average.

Jones, a senior from Florence, SC, was an All-ACC performer for the Tigers last year and an All-American as a sophomore. He won the Jones Cup this past summer and made it to the Sweet 16 of the United States Amateur Championship. Jones finished 41st in the final Golfweek/Sagarin rankings last season.

Clemson begins the fall season this weekend with a trip to the Ridges Invitational in Johnson City, TN.